You are here: Home / Fiction / Horror / Shadow of Wolves by J.R. White 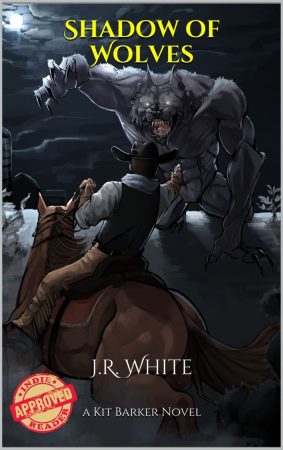 A tortured gunfighter. A Navajo outcast. – And the Creature whose claws would stain the stones of the Mojave red.
Flush with raw silver and ruled by a baron with an iron fist, the tiny mining outpost of Shank’s Point is under siege by a sinister evil.
When the rising sun reveals the claw-torn bodies littered among the rocks, John Swift-Runner calls on his old friend, a vagabond gunfighter, to stand with him against the slaughter he knows will come.
But as their band of misfits hunts for the creature on the burning sands of the Mojave, they stumble into a generations old mystery that goes beyond shamanic curses and into the bloodstained pages of legend.
Can the killing be stopped?
And can a tortured gunman like Kit Barker – with a terrible secret of his own – prevail against something as savage and eternal as the Beast?

Link To Shadow of Wolves On Amazon Kindle Unlimited

What Inspired You to Write Your Book?
Writing Shadow of Wolves was about creating the story I wanted to read. It was probably around 2004 that I picked up a paperback somewhere that promised a “cowboys versus monsters” adventure and was just utterly disappointed with it. The cowboys were simply dudes with big hats and the monster turned out to be swamp gas or something. It bothered me so much that I decided to write the story I had imagined when I saw that simple premise. Ultimately it became much more than that as characters and scenarios came to life, but at its core my writing is about telling the stories I would want to hear.

How Did You Come up With Your Characters?
It depends on the character's place in the story. Protagonists are a mixture of the traits I find most admirable and the flaws most likely to hinder them. Villains and antagonists are based on the traits I find most appalling but tempered by a sense of what would reasonably accomplish their goals. And with all characters, I strive to give them traits that are realistic and human.

Book Excerpt/Sample
A bolt of pain shot up through Cannon’s body as the horse halted, lurching him forward in the saddle.
The mare snorted and laid her ears back against her head. Her hooves shuffled nervous furrows in the dirt and the whites of her eyes shone in the dark. Cannon looked around, realizing for the first time how fast the night had come.
“Easy, girl,” Cannon hissed through cracked and swollen lips, “easy now.”
A growing sense of unease rose in Cannon’s throat as he turned in his saddle and surveyed the night. The deep shadows of evening seemed to shift and move, groaning against their natural boundaries. He swallowed.
It’s all in your head, Tim, he thought. He should find a place to stop the night and build a fire. But not here, he thought as he looked through the darkness. Maybe he could find a better place to camp up ahead.
Cannon touched his spurs to the mare and the animal cautiously stepped forward. Its head held low, almost cowering. They reached a gully in the desert floor and Cannon guided his mount towards it, but the mare refused to move into the ditch. She snorted and whinnied, tossing her head and stamping her hooves against the ground.
“Alright, damnit,” Cannon hissed, turning his horse to the right and cresting back up on the trail.
There must be a coyote around, Cannon mused. Or maybe apaches, he thought as a cold fear crept into his mouth. Had there been any trouble with Indians near Shank’s Point? He tried to remember if he had heard of any and decided he had not. His fear began to subside.
Then Cannon heard the scraping rasp of claws on stone from the brush to his left.
The mare stiffened under the saddle and sidestepped awkwardly. Cannon struggled to keep the animal under control with only his right arm. The mare was on the edge of panic, and Cannon could feel the horse’s terror seeping into himself as well.
Tim Cannon slid one of his revolvers from the holster with his swollen fingers and aimed it into the night. He could only see a few yards, but he aimed in the direction his horse was staring and waited.
There came a wet hissing sound from beneath him, and the stale smell of urine as his horse vented her bladder into the sand.
Then Cannon heard it. A low growl rumbled through the brush and shadow, and the pounding footfalls of something racing across the sand – something fast and heavy.
Cannon felt the pistol buck in his hand, roaring into the silence and splashing fire over the night.
In the bright flash of the muzzle flare, Cannon saw it coming – and it was no coyote.

Author Bio:
J.R. WHITE has been a sailor, scientist, and professional cage-fighter. As a merchant sailor he crossed the Arctic Circle, passed through the Straits of Gibraltar, witnessed sea monsters, and participated in a helicopter rescue atop the tallest cliff in Scandinavia. He has worked as a research scientist studying gene therapy for two major universities and spent four years as a professional mixed martial artist. As a civilian contractor he spent three years at Fort Leavenworth, KS, where he taught hand-to-hand combat to personnel from every branch of the military and over ten allied nations.
A father, adventurer, and military spouse, White and his family have lived in eight states from coast to coast in their nomadic journey as an Army family.
Shadow of Wolves is his debut novel.