You are here: Home / Fiction / Women's Fiction / Racetrack Rogues: One Woman’s Story of Family, Love, and Loss in the Horse Racing World by Dawn LeFevre 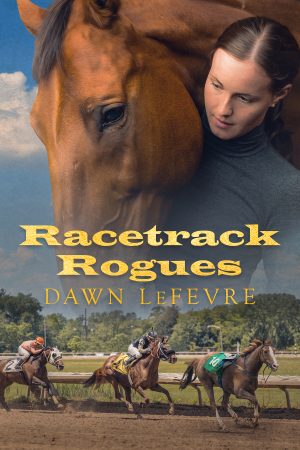 Targeted Age Group:: 16 and up

After the unexpected death of her mother Marilyn, Dahlia is left with only a guilty conscience, boxes of her mother’s memorabilia, and a cottage on her grandparents’ horse farm. When her grandparents take on a dangerous horse that responds only to her, Dahlia is pulled back into the life she tried so hard to escape. Before she knows it, Dahlia has a rag-tag stable of neurotic Thoroughbreds, a bulimic jockey, a party-girl BFF, and an unexpected romance with Steve, the sexy son of her nemesis – legendary trainer Bill Bassett. When Dahlia stumbles upon a forgotten videotape among Marilyn’s possessions, it threatens her precarious relationship with Steve but reveals a way that she can make amends to her mother.
Can Dahlia achieve her mother’s dream without losing the man she loves?

Link To Racetrack Rogues: One Woman’s Story of Family, Love, and Loss in the Horse Racing World On Amazon Kindle Unlimited

What Inspired You to Write Your Book?
The unexpected death of my mother, Anne Bradshaw, who was a horse racing super fan and a two dollar show bettor. She went to Saratoga every year, kept scrapbooks of her favorite horses and recorded every major horse race. I was overwhelmed by just how much memorabilia she had collected – everything from racing programs to books and magazines to Secretariat’s tail hair. Like my main character Dahlia, I had a hard time coping after my mother’s passing. It was my mother’s passion for horse racing that incited me to become a trainer. She passed away in March of 2018 and to this day I can’t watch a horse race on TV without expecting the phone to ring the second the horses cross the wire and hearing my mother’s commentary on the results. Only by writing this book was I finally able to work through my pain.

How Did You Come up With Your Characters?
See above for how my main character Dahlia was developed. As for my horse characters, they were all based on real racehorses that I used to train.

Author Bio:
Dawn LeFevre began working on the backstretch of Atlantic City Racecourse at the age of sixteen. After graduating from Cook College of Rutgers University with a B.S. in Animal Science, she spent the next thirteen years training and racing horses in New Jersey, Pennsylvania and Delaware. Her first novel, BACKSTRETCH GIRLS, won Best Horse Racing Fiction book at the 2021 Equus Film & Arts Festival. Dawn currently works as a contributor for www.PastTheWire.com and her articles have been published in Equus, Weird NJ, the Pacific Coast Journal and The Press of Atlantic City.

Dawn lives in South Jersey with her husband Mark, Australian Shepherd Domino and her cats Tribble and Wonder. You can catch her latest news and read her Tales From The Wine Trails blog at www.dawnlefevre.com.