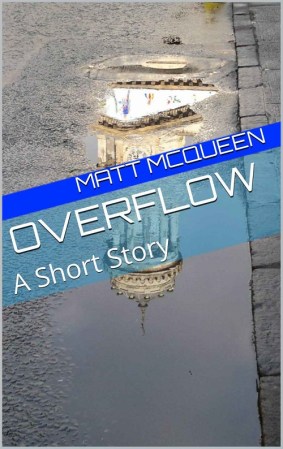 This short story concerns the murder of a computer entrepreneur, and is the account of the police interview of the murder victim’s best friend.

What Inspired You to Write Your Book?
I’d had the idea for some time. I’m a big fan of Philip K. Dick, and that influenced me.

How Did You Come up With Your Characters?
I did some research into police interview techniques, which led me to the characters.

Book Excerpt/Sample
“Hey, Max. Are you with us?”

I opened my eyes slowly, trying to get accustomed to the bright light. I guessed that the cleaners had been and tidied up around me. I could smell chemicals, the great smell of chlorine. “Hi, Steve.”

I’d fallen asleep in the office again. Two weeks in Scotland and I’ve slept here on the couch every day. Never made it back to the flat. I certainly wasn’t in Kansas any more. They said it was just jet lag, but this was lasting a long time.

Once I’d managed to focus, I could see the short, rotund figure of my partner. He took his raincoat off and hung it up.

“It’s pouring outside again. You should be glad you’ve not been out in it. So, how are you settling in?”

I pulled at my crumpled shirt. “Just great. It still feels a bit strange being on secondment over here. Don’t know if the guys are accepting me as one of the team. Some of them still look at me funny.”

Steve laughed. “I think you need a change of clothes. Here.”

He handed me a fresh blue shirt and dark blue tie. I took my shirt off and pulled the new one on.

“Let me help,” he said, rolling my sleeves up and tying my tie loosely. “We’re interviewing again today, so we need to look just right. Just like on TV.”

“I don’t know if this is working out.”

“Don’t worry, once you lose the accent you’ll be fine. You guys always are, it just takes a little while for you to adjust.”

I rubbed my eye sockets, still trying to focus. “So what’s the case?”

“Guy came in and told us that he’d found his friend dead this morning. Turns out his friend is Jack Carter.”

“You know, the big shot computer guy. The guy that lives in the old cinema in the city centre. Tallest cinema in the world, they say. Hard to believe that, when it’s here in Glasgow. Anyway, Carter bought over the building after they stopped making movies. Had it all done up, installed himself in it and from then on it was wall to wall women. Except for…”, Steve paused to look at his notes “Robert Goodman. He came over from Kansas and moved in about two years ago. Best buddies apparently.”

Steve popped a peppermint into his mouth.

“Man, you’re fast! Yeah, he wanders in, cold as a fish, and calmly tells us that Carter has been murdered. We’ve got forensics on their way to the scene right now. The boss thought you’d be ideal to help in the interview. He sees you having a connection with this Goodman fella.”

“Yeah, well you’re both from the same neck of the woods. Anyway, I’ll take the lead as usual and you can watch.”

I loved Steve, but he was so predictable. It did work well though; he made the perfect good cop. Seriously, I can’t think of anyone more likable. I guess that made me the bad cop. He’d give you a firm handshake, I’d likely break the bones. I was learning from the best, though.

“Do we know anything else about Goodman?”

“Not a thing – we can’t find any official records for him anywhere. It’s as if he’s come out of nowhere.”

I stood up and we both made our way to the interview room.

Author Bio:
Although I’ve written for some time as a hobby, I’ve only recently started self publishing (in my 50’s, so it’s never too late).

I am a full time software developer, and write in the evenings and weekends. I also help to run a basketball club in Scotland, so I’m kept fairly busy.