You are here: Home / Fiction / Mystery/Suspense / On the Road to Where the Bells Toll by M. J. Williams 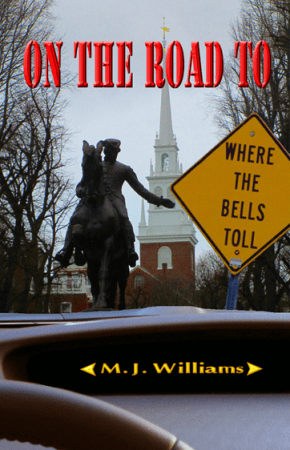 In this second installment of the On the Road mystery series author M. J. Williams packs up the RV and takes sleuths Emily & Stan Remington to Boston for some R&R with the grandkids and a chance to immerse themselves in colonial history. But their vacation takes a deadly turn when they stumble over one body on the Boston Esplanade and another hanging in the steeple of the Old North Church. Now the couple must unravel a tangle of forged clues and flush out the perpetrator before their own untimely epitaphs are written onto the historical landscape. “…a lot of witty humor and wisecracks throughout the story.” ~Devinair (Views She Writes) ” I couldn’t put it down until the end. A must read for mystery readers and history buffs” ~J.Joque (Amazon)

What Inspired You to Write Your Book?
Boston is a natural for combining history with mystery–but not a place you want to drive an RV through, as our intrepid characters found out. We visit Boston often and had the opportunity to visit the sites used in this story up close and personal. That makes plotting and writing so much more fun!

How Did You Come up With Your Characters?
Emily is loosely based on several retired or former police officers we know–both women and men. And perhaps she’s the “we” we’d like to be. Stan was inspired by various academic colleagues. Sometimes the people they meet or whom we kill off are the doppelgangers of people we know or have met–with names, looks, and even genders changed as needed. Some of the people we encountered in our various Boston escapades made it into the book, though totally fictionalized, of course.

Book Excerpt/Sample
Chapter 1:
FOURTH of July fireworks always set Emily Remington’s nerves on edge. The heart-pounding booms, cascades of flaming lights, and the acrid smell of smoke all brought her back to the horror of that one night, decades ago.
She shut her eyes momentarily against the pop-pop-popping flashes of the bottle rockets and took a deep breath. It’ll be okay, she told herself. This is a different time. A different place. She was on vacation.
She opened her eyes and allowed herself to enjoy the sight of her family sprawled out on the blanket, nine-year-old twins Annabel and Allyn snuggled on either side of their Grandpa Stan like pixie bookends. Thirteen-year-old Wynter leaning placidly against son-in-law Philip’s legs, ignoring the bombs bursting in air as she thumbed furious texts into her phone. And daughter Megan, transfixed by the melting colors in the sky layered one on top of the other.
Nope. This was a good night. No murder. No mayhem. No dead bodies. Nothing like the night that building exploded on campus. Just good old-fashioned Fourth of July family time.
The celebration on the Boston Esplanade ended in the usual mind-numbing, heart-thumping white-out of a hundred fireworks all going off at the same time. The crowd around them erupted in a roar of approval, clapping, shouting, whistling.
“I love it! I love it! I love it!” Allyn shouted, she and her twin deserting Stan to jump up and dance.
“Good show, huh?” Megan said to her mother.
“My ears are still ringing.” Emily stood and stretched.
“We might as well stay put for a while,” Philip said, rolling over onto his back. “It’ll take a while for this crowd to disperse, and I’d rather sit here and enjoy the evening than fight for space on the T.”
A hush had settled over the park as families gathered their belongings, folded blankets, searched in the dark for lost flip-flops.
“I’m not in any rush.” Stan grabbed for Annabel then Allyn and began a tickle fight.
Emily didn’t often agree with her son-in-law’s take on things, but surveying the dispersing crowd, she was relieved; this was the first Fourth of July in a long time that she wasn’t responsible for crowd control. She was happy and content to sit back and relax in the balmy night air.
Disentangling himself from the girls on the blanket, Stan struggled to his feet and reached into the cooler for a bottle of water. “Anyone else?”
“I’ll have one, Dad. Thanks.” Megan held out her hand.
“Mumsy, may I have another tonic?” Wynter asked.
“Mumsy?” Emily asked.
“It’s a phase. I hope. Dad, can you grab a can of soda for Wynter?”
Allyn and Annabel, realizing their older sister had beaten them to the forbidden pleasure, bounded to the cooler.
“I got the last root beer!” Allyn waved the can in her sister’s face, and then shrieked when Annabel grabbed it and dodged away.
“Mom! She knows I hate grape. And that’s all that’s left.” Allyn lunged for her sister, now standing ten feet away and taunting her. Annabel side-stepped. Allyn flew past, stumbled and spun, trying to stop herself.
“Allyn!” Megan cried out. But it was too late.
The little girl tumbled over a nearby beach chair taking its occupant down with her. Allyn immediately jumped up, her hands over her mouth in remorse. But Emily was at the woman’s side in an instant, mumbling apologies for her granddaughter. She bent over to extend a hand, but sensed something was wrong. Deadly wrong. The woman stared up at her with vacant eyes. Emily reached down to feel for a pulse then recoiled at the cold flesh.
“What is it?” Stan asked, moving toward her. “Is she okay?”
“I think you and Megan should leave now and take the kids home. Philip, call 911.”
“Did I hurt her?” Allyn asked.
Emily wrapped Allyn in her arms. “Honey, you go with Grandpa to help your Mom with the blanket.”
“Why? What’s wrong with her?”
“Come on, sweetheart. Grandma will take care of it.” Stan took the girl’s hand and walked her over to her mother. “Let’s pack up,” he said to his daughter. “Annabel, grab that cooler and drag it over here, okay?”
While Philip spoke tersely into his cell phone, the others gathered up their things. Emily took the small blanket from under the dead woman’s picnic basket and draped it loosely over the body to keep the curious passers-by from stopping and gawking. But she hadn’t noticed Wynter, who was hovering over her shoulder.
“Grandma.” The slender teenager stood with her arms wrapped tightly around herself, as if she were deadly cold. “That’s the lady Grandpa and I went to see yesterday.”

Author Bio:
The writing team of M. J. Williams is comprised of sisters-in-law Peggy Joque Williams and Mary Joy Johnson (nee Williams). Peggy, having grown up in Michigan’s Upper Peninsula and thus a Yooper-by-Birth, has just retired from many years as an elementary school teacher; she is also a freelance writer and screenwriter. Mary Joy, a retired English professor, specialized in teaching writing on the community college level. She is an accomplished quilter and has had her work displayed in shows. Having lived in a variety of places, she spent her career years in Escanaba, Michigan, making her an honorary Yooper. Both writers now live in Madison, WI, where they happily identify as Cheeseheads-by-Choice.