You are here: Home / Fiction / Mystery/Suspense / Mysteries at Treasure River by Nipuna Ranasinghe 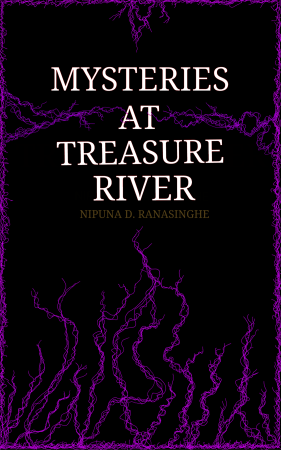 Mysteries at Treasure River is a SciFi mystery adventure novel written from the first person perspective. The person that was writing the story is a young journalist that is trying to get a big breakthrough to enhance the career as a journalist. The story takes place in a rural area and the people that this young journalist meet only displays the character qualities of humans that we meet on a short encounter. Because this is written in first person perspective the character qualities stay inline with the perspective of the writer.
The reader gets the ability imagine the physical nature of the story teller with complete freedom to their liking and comfort. This is also extended to other characters and locations as well.
The plot on the other hand have incredible twists and terns leading up to a discovery that is science fiction in nature but with a hint of reality lurking. It’s the small factors and points that ends with couple of sentences that really demand the readers attention.
The book is about a 5 hour read with a nice flow where the different story line come together to form a grand out come. The pace of the story is quick on the other hand and have few moving parts which demands the readers focus and imagination.
Hope you have a great read !!!

Written & Reading Perspective:
This book was written from the perspective of a young journalist coming home from an incident that took place in the past few days. Restricted from the journalistic way this young person puts memories in to words and writes this book for personally keeping the story of the incident from fading away from memory. A book that was written to be shelved forever out of the public eye. Just to keep the memories alive while they last and relevant.
The following novel should be read in the mind space of a book that is written by a young journalist coming from a dramatic few days of investigations for story and writing that experience that was absorbed during those few days into paper to preservation of memory.
The term “Botanical Warfare” is an attempt from the authors behalf in introducing a novel term where it meant the weaponization of botanical science for defensive or offensive actions.

Link To Mysteries at Treasure River On Amazon Kindle Unlimited

What Inspired You to Write Your Book?
To share my imagination with the world.

How Did You Come up With Your Characters?
the characters were spontaneous and was created as the story progressed.

Book Excerpt/Sample
Along with the screech, a beam of highly bright light that was blood-red in color came out of the floating object towards Kevin, instantly vaporizing him without leaving a trace of the victim. The light beam only made a burnt mark on the sandy banks of the river, leaving no trace of the human being that stud in-between the sandy river bank and the floating light. I was speechless and shocked to the core with the horror that was taking place in front of us.
The shock manifested as tears and the mumbling unable to scream or talk, trying to understand what had happened to Kevin. It was difficult to register that Kevin was no longer among us anymore. He had just vanished between the blood-red beams of light.

Author Bio:
This is my first time dropping my pen in the ink to write a book. In this novel I try to look at a SciFi angle that is not a common topic.

This book is written from a first person perspective of a young journalist that went to a small sleepy town called Treasure River for a filed report. But when more he dive into the story more mysterious it gets. End of the day the law got in the way to tell the story to the world. To preserve the memory of what look place in Treasure River this young journalist did what is known by putting the story to written word.