You are here: Home / Fiction / Mystery/Suspense / Murder in the Arboretum by Christa Nardi 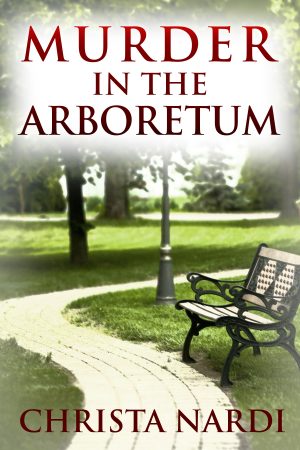 Another murder in small town Cold Creek has tensions rising. Clive Johnson, the groundskeeper at Cold Creek College, is a convenient scapegoat for a police chief. Convinced Chief Pfeiffe has it all wrong, Sheridan Hendley sets out to help prove Clive’s innocence. Not everyone is pleased by her enthusiastic search for the truth.

Link To Murder in the Arboretum On Amazon Kindle Unlimited

What Inspired You to Write Your Book?
I love “light” mysteries and cozy mysteries. I grew up reading Nancy Drew and the Dana Girls, watched Perry Mason and Jessica Fletcher solve crimes. I’ve also been fascinated by the assumptions we make, hence my “day” job as a psychologist and professor. In this book, there are lots of assumptions being made and the main character, Sheridan, questions some of these assumptions.

How Did You Come up With Your Characters?
I wanted the main character to reflect the best of a protagonist, but still be human. Sheridan Hendley is a strong female character – not ditzy or silly at all. She is a professor and psychologist. She is very curious, probably more so than is healthy, and that gets her in trouble. Sheridan is also recovering from a divorce and embarking on a new relationship.

Book Excerpt/Sample
As we rounded the curve, I first spotted an older man in work clothes. He was black, balding and sported a beer gut not quite camouflaged by the support wrap to protect his back. Some gardening and lawn tools were on the ground by his feet. His gaze was down and his arms just hung by his side. He didn’t look up as we came into view. I assumed that he was Johnson.

A few feet away, a young man sat on the bench. His body doubled over with his head between his knees. Even from a distance, I could see his body shaking. A man in uniform crouched by his side and talked to him. I left Hirsch’s side and walked over to the two of them. I introduced myself and in my calmest voice, I asked, “How are we doing over here?”

“Ma’am, this here is Nick Davidson. He’s still pretty upset, but doing better minute by minute,” the paramedic commented, also in a quiet voice. “Isn’t that right, Nick?”
Nick’s head bobbed as if in agreement, but he didn’t say a word. “Do you still feel dizzy, Nick?” asked the paramedic. Nick shook his head and raised his eyes to look at me. His face communicated a lot. Emotions, from fear to shock to dismay to embarrassment, flitted across his face.

“Nick, can you tell me what happened here this morning?” I asked when I had eye contact. He hesitated, then mixed with deep breaths and tears, Nick told me he had been working with Johnson. He moved in between a cluster of azaleas to get a piece of trash he saw. As he talked about the body and how he tripped over it, he broke down again. I placed my hand on his shoulder and waited for him to gain control. He started to hyperventilate.

The paramedic stepped in and directed him to monitor his breathing. When he was breathing normally, I asked him whom we could notify to come get him. Many of the students at Cold Creek College had family locally. I was hoping he was one of them. He answered and managed to get out his cell phone and hand it to me. He was shaking too badly to make the call himself.

I was able to find the number, call, and advise his mother that there had been an incident on campus. I reassured them that Nick was okay but in shock. He would be transported to the Physician’s Center. They agreed to meet him at the small local hospital. A second paramedic showed up and the two managed to get Nick to stand and walked him toward the cart. The cart took him to the quad and a waiting ambulance.

I turned toward Johnson and hesitated. He looked at me with something akin to hostility. Hirsch must have caught the glare. He took a step closer, looked at me, and waited for my next move. I took another step and Johnson’s glare faded. Again I introduced myself and asked what had happened. He related that he and Nick were cleaning out the beds. He explained that Nick was in the azaleas to pick up what looked like trash. One minute he was standing and the next he was on the ground and screaming and kicking.

Johnson shook his head. He explained he was afraid Nick was hurt, maybe bit by a snake. When he got in there, looking out for a snake, he saw the leg and then body. The shirt sleeve was what they had seen from the path.

He shook his head again and just looked away. After a minute or two, he looked back at me. He said he grabbed Nick and shook him, but Nick was just hysterical. Nick fainted. Johnson pulled him out and radioed it in to dispatch.

“Mr. Johnson, if it’s acceptable with the Chief, is there someone who can come take you home?” I asked quietly.

He looked at me with disdain and answered, “I don’t live far. I can drive but my boss …” He shrugged and studied his feet. I looked over to Hirsch as he turned and walked back toward us.

“Johnson, the Chief says you can go. He says your tools here, they have to stay though. Chief Pfeiffe, he already told your supervisor. I’m going to write down what each one is and Dr. Hendley here will be a witness. You’ll have to tell me what some of these are called. Is that okay with you?” Hirsch’s demeanor was quiet but also authoritative.

Johnson nodded and Hirsch made a list of the tools. I signed the list and then the three of us started the walk back to the quad. Again, the cart intercepted us and we rode the rest of the way. Johnson visibly shrunk back at the crowd that had gathered as we made our way out of the shelter of the Arboretum and into the quad. Officer Matthews came over and invited Johnson to go with him.

Johnson’s panic stricken expression as Matthews pointed to his cruiser spoke volumes. The expression passed when Matthews opened the front door and moved his gear to the back seat. Johnson still looked scared but got in the front seat of the cruiser. I wondered if Johnson had a history with the law or if he was just shook up. The cruiser was about the only way he was getting past the growing crowd.

Author Bio:
Christa Nardi is and always has been an avid reader. Her favorite authors have shifted from Carolyn Keene and Earl Stanley Gardner to more contemporary mystery/crime authors over time, but mystery/crime along with romance and scifi/fantasy are her preferred choices for leisure reading. Christa also has been a long time writer from poetry and short stories to the Cold Creek series, Christa has joined many other reader/writers in writing one genre she enjoys reading – the cozy mystery. The series started with Murder at Cold Creek College; Murder in the Arboretum is the second in the series. Murder at the Grill is the third. The fourth in the series is scheduled for release in Fall 2016. Christa Nardi is a pen name for a real life professor/psychologist from the Northeast who is well published in nonfiction and technical venues.

Link To Murder in the Arboretum On Amazon Kindle Unlimited