You are here: Home / Nonfiction / Autobiographies, Biographies & Memoirs / Mother, It’s Hard to Forgive You: Ridding Myself of the Family Scapegoat Mantle by Nancy Richards 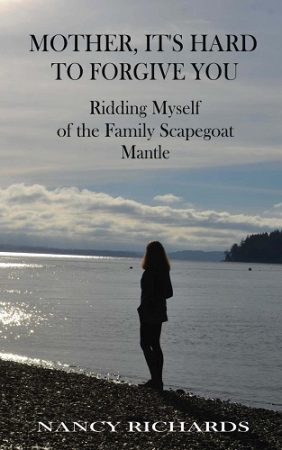 The mother-daughter bond is possibly the strongest of all human bonds. But what if that bond is broken by betrayal? There is no greater betrayal than for a mother to betray her child.

After a childhood plagued with physical and emotional violence and a fourteen-year estrangement from her entire family, Nancy Richards discovers herself at a crossroads. The mother she had both loved and feared as a child reached her by telephone to offer an apology for her abuse and to express a desire for reconciliation.

As she looks into the rearview mirror of her life and at the horrors inflicted by her mother, Nancy must decide whether to risk the safety of her present life or remain an orphan of circumstances. Is there really any reason to go back for more?

This is Book 2 of a two-book series and also works well as a stand-alone book.

Link To Mother, It’s Hard to Forgive You: Ridding Myself of the Family Scapegoat Mantle On Amazon Kindle Unlimited

What Inspired You to Write Your Book?
I began writing books with the hope that I could help lighten the load for other survivors.

For more than a decade, I struggled with healing, and with forgiving those who caused my abuse. The focus of my first book, "Mother, I Don't Forgive You," was to offer a healing roadmap for survivors like me who were deeply damaged after succumbing to the pressure to forgive prematurely, which often prevents healing. I felt compelled to offer others the support I had so desperately needed but was unable to find.

“Mother, It’s Hard to Forgive You: Ridding myself of the Family Scapegoat Mantle” came to fruition after many readers and abuse survivors in online support groups asked me how I shed my family scapegoat role. Others were very curious about how I handled estrangement and the decision of whether I should ever reconcile with my family. After realizing how many people struggled with both issues, I was eager to share my experiences.

How Did You Come up With Your Characters?
I have or did have a personal relationship with each of the characters.

Book Excerpt/Sample
This excerpt is from Chapter Five: Standing in the Truth, and comes right after each of my family members—one by one—severed their relationships with me:

Breaking the cycle of abuse is one of the most important undertakings I have attempted in my lifetime. I knew that breaking the cycle would take more than simply forgiving, forgetting, and “getting over it”. Living a new, better life for my children and me required healing from my abuse and understanding my mother, our family dynamic, and myself.

Long into adulthood, I was drawn to my mother, craving and searching for her love. Although I often rebelled against her, on a certain level, I accepted my mother’s blame, denial, and the minimization of my abuse. Yet, during therapy, I pondered how I would react if someone threw one of my children down a flight of cement stairs. The thought of anyone hurting one of my kids horrified me. How had my mother allowed this to happen to us? Although it was difficult at the time, turning the corner from internalizing blame to accepting my mother’s responsibility freed me from denial. Once freed, I began to speak the truth and realize I was justifiably angry. I knew I was angry; but, for the first time, I gave myself permission to be angry. My anger helped me give voice to my experiences.

I paid a huge price for standing in the truth. Taking a stand against abuse is not possible without breaking the silence and exposing injustice. Therein lies the biggest obstacle to creating an abuse-free family legacy.

“It is very tempting to take the side of the perpetrator. All the perpetrator asks is that the bystander do nothing. He appeals to the universal desire to see, hear, and speak no evil. The victim, on the contrary, asks the bystander to share the burden of the pain. The victim demands action, engagement and remembering.” —Judith Lewis Herman, M.D, Trauma and Recovery

For twenty-five years, since the age of ten, I stood alone in the truth about my family, trying desperately to stop the abuse. The appearance of normalcy and safeguarding the family secret took precedence over everything else. The secret was more important than me, health, happiness, family, or relationships.

Had I known the price I would pay, the losses I would incur, and the isolation I would feel for simply telling the truth, I would have thought twice. However, the truth always has a way of coming out—if not in this generation, then in the next.

I worried my family wouldn’t love me if I broke my silence and exposed Mom’s abuse, but in the end, I didn’t believe they would all abandon me. I didn’t know that one by one, I’d have to choose between my three brothers, my grandparents, and the truth. Still, I told the truth.

My life circumstances challenged me by asking:

• Will you tell the truth even when your mother retaliates?

• Will you continue to tell the truth even when she convinces family and friends that you are crazy, that you lie, that the abuse is your fault, or that it is all in the past?

• Will you tell the truth when, one by one, family members and friends sever their relationships with you?

• Will you still stand in the truth when you find yourself standing alone?

Author Bio:
I remember the day I fell in love with the written word. It was the moment Mrs. Links, my third-grade teacher, cracked open Charlotte’s Web and introduced me to the troubled, yet triumphant life of an emotional little pig named Wilber and his compassionate spider friend, Charlotte.

At the time, I had just lost my beloved father to a brain aneurysm. Before I could even catch my breath, my dad was replaced by a new man who along with my mother created an unfamiliar, dark world that I could never have imagined.

As she read aloud, Mrs. Links offered me a refuge where creatures shared caring relationships that included emotional connections and who strengthened one another through trial and triumph. From that day forward, I continued to seek out books that shone a light on the deep recesses of my wounded mind.

Nancy Richards is an adult survivor of childhood abuse, the lucky mother of two engaging adult daughters, and the grandmother of one energetic grandson. She is a retired businesswoman and former co-owner of a large wholesale food processing company in Seattle. Along with her husband, Richards makes her home in the greater Seattle area at the foot of the Pacific Northwest’s great outdoors.

Link To Mother, It’s Hard to Forgive You: Ridding Myself of the Family Scapegoat Mantle On Amazon Kindle Unlimited