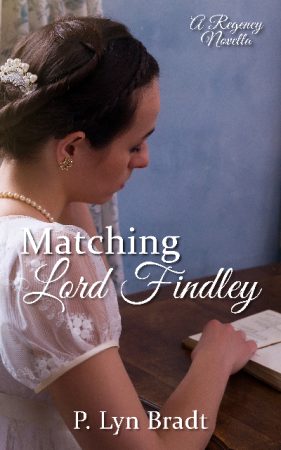 Charles Kemp, Viscount Findley, hates the London Season. He does not enjoy dancing, he is uncomfortable in crowds, and he absolutely loathes having debutants thrown at him like second rate goods at a street market. If it weren’t for the promises he made to his mother, he would avoid balls and parties all together; he would much rather stay home with a book.

His sister, Lady Amelia, and his best friend, Sir Henry, are sympathetic. That is until they receive an ultimatum that if they ever wish to marry, they must first find Charles a wife. With only three months to work with, can they find Charles an eligible match in time to secure their own happily ever after?

This clean and wholesome romance novella is sure to put a smile on your face.

What Inspired You to Write Your Book?
Writing gives me the opportunity to mix two of my favorite things, history and happy endings. There is nothing more satisfying for me than creating stories which allow readers to escape life for a while and return with a smile on their face.

How Did You Come up With Your Characters?
I wondered how introverts would survive the Regency world of balls and social games.

The last time Sir Henry Corbyn remembered being in the oak paneled study of the Earl of Rockford, he'd been sixteen years old and trying to explain how the earl's son had accidentally been pulled into a school prank that had landed both boys in hot water. At the moment, Henry felt like his current conversation was going even worse.
Henry had suspected that the earl would not be overjoyed by his only daughter being courted by a mere baronet. But he had been hopeful that his longtime friendship with the family, as well as Lady Amelia's own feelings, would be taken into account.
The earl's hazel eyes looked very somber and contemplative as he stared at Henry across his large desk. After an uncomfortably long time, at least for Henry, the earl finally spoke. "I like you boy, I always have. But can you really provide my daughter the life she deserves?"
Henry looked the older man in the eye and spoke with as much confidence as he could muster, far more than he actually felt. "I understand that my position is less than you may have hoped for Lady Amelia, but I am respectable, my estate is relatively prosperous, and, if I have the honor of winning your daughter's hand, I will do everything in my power to provide a good life for her." Though he would not have thought it possible even moments before, Henry's pronouncement seemed to only increase the intensity of the earl's stare.
The two men watched each other for a long moment before Henry began to feel desperate and spoke again. "Is there nothing I might do to receive permission to court Lady Amelia?" Then, an idea came out of Henry's mouth before he had even registered that it had entered his brain. "What if I find Lord Findley a wife?"
The earl's expression quickly changed from scrutiny, to shock, to disbelief, before it finally settled on curiosity. "You are suggesting that if you are able to find a match for my son, I will give you permission to court my daughter?"
Henry almost backed out. The earl made the idea sound even more preposterous than Henry had. But then he considered for a moment and decided that he had nothing to lose. Nothing except Lady Amelia herself, and if he could not sway her father he had lost her anyway. "Yes, Lord Rockford. If I can find a wife for Lord Findley, you will promise to consider my suit."
"How long would this arrangement last? After all, I cannot keep Lady Amelia on the shelf."
Henry pondered for a moment. A year was probably more reasonable, but that currently felt like an eternity. So instead he suggested, "Six months. I must have Lord Findley settled within six months."
"Three months," the earl countered. "Lord Findley would need to be settled within three months. And it must be a respectable match with no scandal attached."
Three months might be considered a short courtship and marriage under ideal circumstances. In this case, it would be nigh on impossible. Henry finally took a steadying breath and offered his own counter. "What if Lord Findley was betrothed within three months?"
"It would have to be announced publicly," came the reply.
"What if it were announced in the Times?" Not all engagements were announced in the Times, but the heir of an earldom becoming betrothed would be of interest in the society pages.
"If Lord Findley's betrothal to a respectable young woman is announced in the Times within three months, I will discuss your suit with my wife before making my final decision."
It wasn't a yes, but Henry was confident that Lady Rockford would be on his side and so he decided to accept the terms. The two men shook hands, and then Henry walked out of the study, wondering what on earth he'd just agreed too.
*****
Henry was walking towards the library when a voice startled him from behind. "What did he say?" Lady Amelia had been so well concealed in a window alcove that Henry had not noticed her until he heard her lovely voice.
His heart nearly stopped at the sight of her dressed up for the night's ball. She looked lovely in her white gown with green accents. Before answering her question, Henry motioned for her to come out into the hallway. Neither of their reputations would do well being caught in an alcove together. Conversing in an empty corridor would be suspicious enough for some gossips. Once she had emerged they began walking casually down the hall and Henry explained. "He did not say no."
Amelia nearly shouted with glee before her thoughts finished parsing his vague answer. "If he did not say no, what did he say?"
Henry ducked his head slightly and then admitted "he accepted my suit, on condition."
"Condition?" Amelia blurted, "what condition?"
A deep sigh preceded his confession. "I have to find Findley a wife."
Amelia stopped walking and turned to face her beloved. "Charles?" she moaned. "We have to find a match for Charles? I thought you said he did not say no?"
Henry smiled slightly. "Trust me, my dear. I have a plan."

Author Bio:
Patricia prefers theaters to movies, jazz to pop, and books to just about anything else (besides her family, of course).

She spent her younger years water skiing, scuba diving, and exploring more than a dozen different countries. Now she is on an even greater adventure with her husband and three children; all of whom are masters at making sure that life is never dull.