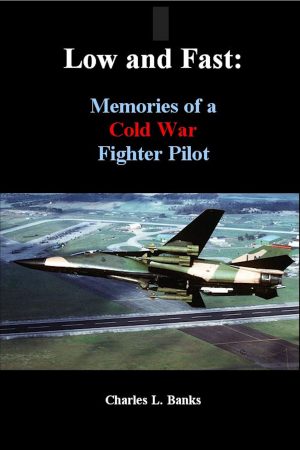 Targeted Age Group:: 16 and up

Join Chuck flying the F-4, F-105, F-111, & O-2. Accurate “war stories” highlighted by 7 months of combat in Vietnam bring the thrill of flying fighters to the reader. Chuck’s inspiring career took him to Texas, California, South Korea, Vietnam, Thailand, England, Germany, and Florida. Along the way, he married another Air Force officer and they had a daughter in California and another in England. Both are now retired from the Air Force and civilian DoD agencies. The dangers of fighter operations are clear with accidents at several locations and Chuck’s F-4 ejection into the Yellow Sea.

Link To Low and Fast: Memories of a Cold War Fighter Pilot On Amazon Kindle Unlimited

What Inspired You to Write Your Book?
Pilots of all types are always telling their exciting experiences to each other and all who will listen. My two daughters kept telling me to write my stories down while my memory is still clear, because they want to remember also. That evolved into this book. I suppose that some day I will read it to refresh my own memories. Therefore, I wrote everything as accurately as possible with no embellishments. The Amazon free self publishing system was the final encouragement. Sales are nice, but I hope to inspire young men and women to follow their dreams even if involves flying.

How Did You Come up With Your Characters?
It is an autobiography. All people mentioned are real with only first names in most cases.

Book Excerpt/Sample
One night in September ’72, I was number 2 in an F-4D 2-ship Close Air Support (CAS) mission. We were trying to help a surrounded South Vietnamese Army (SVN) unit that got into a much larger engagement than expected near Quang Tri.
The Forward Air Controller (FAC), call sign Covey, was out of flares and his rockets wouldn’t fire, so he couldn’t show us where to drop. All we could see was a blank black area with sparkles of artillery explosions carpeting the place. The artillery fire was from both sides. We couldn’t tell friendlies from bad guys since the friendlies were nearly surrounded.
We reached Bingo fuel and had to head back toward Korat Air Base, Thailand. A few minutes after we left, artillery started a fire in the middle of the main group of North Vietnamese troops, so the FAC asked us to come back.
We went back while the FAC arranged for us to land at Da Nang (the only base within our fuel range by then) instead of Korat. The FAC had us drop our 2 strings of 12 MK-82 (500 pound) bombs west to east with one string on each side of the fire. That would head us right for Da Nang and get us on the ground safely with our low fuel state.
Lead rolled in aiming left of the fire. I rolled in aiming right of the fire. I thumbed the pickle button and felt my 12 bombs depart their racks. Pulling off target after the 30 degree dive, I was blinded by huge explosions in my rear-view mirrors. As we turned right, I looked back and saw the largest explosions I have ever seen growing and spreading over a large area. “What the Hell was THAT?” yelled my Weapon System Officer from the back seat.
While pulling 5 Gs to avoid a twin line of red 23mm tracers from north of the target area, I grunted “Don’t know, but it sure blew up!”
It turned out to be an ammunition dump that a battalion of North Vietnamese regulars was guarding. We found out later that the SVN unit we were supporting used the chaos to get away with all their guys. There was no way to estimate enemy casualties, but FACs reported that the place burned and exploded for 2 ½ days!
Unfortunately, on our way to Da Nang, a rocket attack hit and cratered both Da Nang runways, closing them. We asked Panama, the area radar controller, for a tanker over the water or over South Vietnam. Bad news. None were around. The few places north or west of Da Nang where an F-4 could land were closed months previously. All we could do was head for Nankon Phenon AB (NKP) in Thailand, the closest place we could land.
That was also where the Search and Rescue (SAR) forces were based. We hoped we could at least make it into Thailand. We jettisoned our empty drop tanks to reduce weight and drag and climbed to about 45,000 feet to get as much range as possible.
After many calculations and recalculations, we realized that Lead couldn’t make it across Laos to Thailand, and I could probably just make the Thai border, but not to NKP. The GCI controller started to arrange a SAR, and we developed a plan for Lead to glide as far as possible and eject at 5,000 feet. I would follow him down, circle once to record their location, then see how far west I could get before doing the same thing.
Of course, it was about 2 AM, so the location wasn’t going to be very accurate. We had no idea what terrain we would end up in. It could be jagged karst mountains, jungle, or flat plain. We did all we could do to prepare for ejection if our engines went silent.
As Lead’s fuel gauge approached zero and I had maybe 5 minutes left, a tanker called on Guard frequency. He said they heard of our situation and had the throttles to the wall “heading across the fence” (That’s the Thailand/Laos border.) We had never heard of a tanker flying into Laos before.
We pulled the throttles to idle and coasted down to his 24,000’ altitude using very little fuel. He did the most perfect standard “tanker turn onto fighter” maneuver that I have ever seen and rolled out of his left 180 degree turn less than 100 feet in front of us just as we leveled at his altitude. Kudos to the tanker crew and Lead WSO!
The Boomer plugged into Lead with the boom fully extended and pumped a few hundred pounds in. I stayed tucked tight on Lead’s right wing. I no longer bothered looking at my fuel gauge, because it had stopped at the bottom. Then, I connected, got some fuel, and we all started breathing again. We both took plenty of fuel to get back to Korat and even divert if necessary.
The next day, we wrote up the paperwork to nominate the KC-135 crew for a Distinguished Flying Cross (DFC). I don’t know what became of that. They certainly deserved it. They saved two F-4s for sure and likely the four of us. No one who bailed out in that area of Laos returned unless they were rescued within a few hours. We were also nominated for a DFC, but it was downgraded to a single-mission Air Medal.
Each mission into North Vietnam was worth 2 points. SVN, Laos, and Cambodia were worth 1 point. 20 points was worth an Air Medal. Air Medals could also be awarded for single missions.
We arranged for the tanker crew to be well supplied with drinks at the Utapao AB Officer’s Club. I think it was a case of Chivas Regal Scotch.
On the way to Korat AB, I got to thinking, “How did I get from the nice classrooms at Purdue to be in this situation strapped into the ejection seat of a deadly fighter over hostile territory at age 25?”

Author Bio:
Chuck Banks was born in northern Indiana two years after WWII ended. It was a period of recovery from the two World Wars and then the Korean War. The Cold War followed. He experienced the fear and anxiety of growing up in a world where unstoppable nuclear missiles were only 30 minutes away at all times and world leaders were constantly threatening each other. Russia’s Nikita Khrushchev even emphasized his threats by pounding on the table at the United Nations with his shoe, and exclaimed “We will bury you!” He may have meant economically, but it seemed to be a dual meaning.
Chuck developed a deep need to help protect his country and its people from the terrors of Communist giants and religious terrorists bent on world domination. He completed his education and became a fighter pilot in time to participate in the last year of the Vietnam war. The rest of his career was spent training and preparing for the possibility of even bigger wars, hoping that our preparedness would deter the start of one.
After 20 years, he retired from the Air Force, and continued participating in defending the US while working in various Department of Defense agencies for a second 20-year career.