You are here: Home / Bargain Books Under $3 / Love on the Rocks by Kay Harris 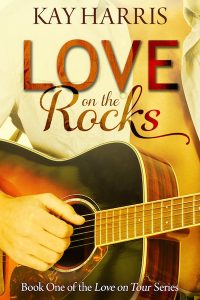 Love on the Rocks by Kay Harris

Dani Roberts is a humble park ranger with a dark relationship past. To avoid dealing with her future, she hits the road for a little adventure. In a lonely cafe in the middle of the nowhere Nevada she runs into two rock stars. Given the current lack of direction in her life, she accepts a ride on their tour bus.

Hank Tolk is certainly her type, and definitely a terrible player. Sean Rush is a bigger-than-life, scary-looking, tattooed monster of a man. She has no intention of hooking up with either of them, but when disaster strikes, one of these rockers snags her heart.

If things were different, falling in love might be simple, but Dani has demons to wrestle with before she can be with a man who has the world at his feet.

Love on the Rocks is a classic story of an ordinary girl meeting an extraordinary man. It is peppered with humor, sweetness, and a touch of sexy. This journey of self-discovery, friendship and love will make you want to jump on the tour bus for the long haul.

What Inspired You to Write Your Book?
My lifelong love of music and romance inspired this story – with a little help from a crazy dream. I wondered what would happen when two people from different worlds crashed into each other. Could their common interests, their friendship and their passion traverse the vast chasm in their lifestyles?

How Did You Come up With Your Characters?
My characters definitely have elements of real people in them. But as they were put down on paper they began to take on a life of their own. And they decided where their story would go. I was just their vessel.

Book Sample
My co-workers practically dive into the back office, one on top of the other.

“Oh my God!” Kendra exclaims. “Dani, you have to tell us everything!”

I calmly place the money I’ve just finished counting into the safe. While I’m crouched in front of the steel door, Kendra steals the chair I’ve just vacated.

“Seriously, this is the most incredible thing that has ever happen to me. He talked to me!” Jessica shrieks, pacing the small office.

Just before we’d closed the visitor center, he’d walked in. He wanted to see me. He wanted to talk. So I’d sent him to my trailer to wait for me while I finished up for the day.

Now I’m feeling panicked. My co-workers, meanwhile, are in complete awe. I understand how they are feeling. I remember how it was the first time I saw him, too. He can be… overwhelming.

Jason perches himself on the edge of the desk and tries to look cool. “We just wanna hear the quick version, ya know.”

I decide that it won’t hurt to stall a little bit. The man himself is waiting for me now, and I have absolutely no idea what to say to him.

I settle myself on the opposite edge of the desk and look at the three of them. They’ll be the first ones to ever hear the story from beginning to end. And maybe, I decide, it’s not such a bad thing for me to tell it.

I was sitting in a diner in a tiny town in southern Nevada minding my own business. The air was thick and slightly acrid, it reminded me of the smell in the basement storage room of the Grant Village Visitor Center. Perhaps the memory was so strong because I’d been in that storage closet just four days before, putting away wolf and bear skins for the season.

Right then I should have been sitting in the small room I rented in the off-season in an East Bay Victorian, sending in applications in hopes that I would get a permanent job, so I could leave my rootless existence behind. I could hear my mother’s voice in my head, you are 28-years-old Dani, you need to settle down.

Instead of heeding my mother’s advice, I was sitting there in the middle of the night, in the middle of nowhere, eating a cold cheese omelet and drinking what was either coffee or the floor cleaner. I was alone, stranded, and a little frightened after what had just occurred in the cab of an eighteen-wheeler.

A breeze hit me as the door opened with a heavy sigh. I looked up to see two massive men walk casually into the diner.

I knew who they were the moment they walked in. It was three in the morning in a town the size of a football field, so they felt no need to wear sunglasses or baseball hats. They were both in t-shirts and jeans, with scrubby black boots. I watched as the two men strolled casually through the quiet diner and took the table right beside me. I returned my gaze to my omelet.

I listened hard as chairs scuffed the linoleum floor and the table was shifted to accommodate their heights. Without looking, I could tell that they’d settled into opposite sides of the table. I could hear the flip, flip, as they paged through the laminated menus.

The minutes seemed to drag by as I resisted the urge to look up at them, my gaze concentrated on the yellow glob of egg and cheese on my plate.

My head snapped up in surprise.

Hank Tolk was tall, lean, and muscular. He wore his light brown hair short. He had a handful of tattoos on his upper arms. He was known for his severe sobriety, at least for the last ten years or so.

He was definitely looking at me, right at me.

Hank grinned a playboy grin. He was, objectively, a beautiful man.

“I’m Hank, and this is my buddy Sean,” he pointed his thumb at the man across from him.

Sean Rush was even more terrifying-looking in person than he was on the album covers. He was absolutely massive, standing 6’6, and covered head-to-toe in muscles, which were deeply tanned and sported a variety of tattoos that ran from his wrist to his shoulder on both arms, as well covering the backs of both calves. On that night, his long black hair was tied back in a ponytail, but in the music videos I’d seen of him it flew wild and hung below his shoulders.