You are here: Home / Fiction / Romance / Julia and the Devil by Sahara Kelly 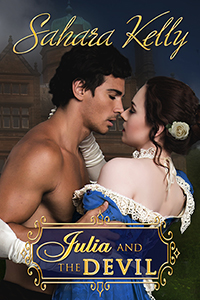 Sir Lucius “Mad Devil” Gordon is on the brink of disaster! He’s broke and his creditors are demanding his head on a platter. There’s only one option left – marriage! But nobody in society will entertain the notion so he must look elsewhere.

Widow Julia Willoughby has reasons of her own for needing a husband, but passion isn’t one of them. Neither bride nor groom anticipates the desire that flares between them, or the strange adventures that lie ahead. It’s the mis-match of the year, but it might just work, with a little help from Fate…

What Inspired You to Write Your Book?
My love of the Regency is always lurking in my “book brain”, and I also admire strong-willed women who were able to make their own lives, in spite of the restrictions of that era.

And who doesn’t adore a wicked rogue who learns the difference between lust and love?

How Did You Come up With Your Characters?
Sir Lucius Gordon is just one of “those” fabulous male heroes we all sigh for. And those are my favorite kind of characters. They’re flawed, opinionated, and very open in their wants and desires. What’s hidden? Their hearts. And that’s where my stories lie.

Julia was an instant appearance. She’s not a Society beauty, but a self-suffiicient, rather “managing” kind of woman. I’d like to think I could have been her if I were in her circumstances in 1816.

Book Excerpt/Sample
Thanks to Sidney’s careful attention, Lucius found himself in fresh clothing, shaved, and achieving a modicum of respectability for his visit to his about-to-be-betrothed. Although “respectability” was an ill-defined and debatable word that meant different things to different people.
As the carriage turned down a quiet street, Lucius realized he was about to sink into the correct and proper depths achieved by the small portion of London’s populace who were outside the Ton but above the riff-raff. Neither fish nor fowl nor good red herring, as Sidney would have said.
He ignored the neat rows of houses, barely acknowledged the respectful bow of the servant who hurried to the horses’ heads, and spared only a brief glance at the large brick-pillared building that held his future.
He was not a happy man.
“I am Sir Lucius Gordon. Mrs. Willoughby is expecting me.” He raised an eyebrow at the maidservant who had answered his knock within seconds. No butler. Typical. He didn’t bother to reach for a card. The girl would probably pick her teeth with it or something just as appalling.
“Yes sir. This way, if you please.” The maid dipped a respectful curtsey and led him to a door, opening it with a flourish. “Sir Lucius Gordon, Ma’am.”
“Thank you Jenny.”
It was a cultured voice, at least, and Lucius squinted through the sunlight to find its owner. His gaze almost missed her.
Standing in a patch of shadow was a woman of average height, with brown hair, brown eyes and a gown that matched both. A mouse. Good God. And Sidney thought she would do?
He choked down his immediate response and tilted his head toward her. “Mrs. Willoughby?”
“Indeed.”
Chatty too. Although her lack of conversation wasn’t an immediate point against her. There was nothing worse than a woman who wouldn’t shut up.
“If you would care to be seated, sir, perhaps we can discuss the terms of our…our business arrangement.” She moved a little and he got his first good look at her face.
In repose, it was nothing to write home about. Nose, two eyes, mouth—a little on the large side with full lips—and a determined chin. Well, he could’ve done worse. “Business arrangement, ma’am? Is that how you view our pending marriage?”
Something flashed behind her eyes. “Yes, Sir Lucius. That is exactly how I view our impending marriage.”
Lucius was a little surprised to find himself unsure of his next words. There was an air of reserve—control perhaps—about Widow Willoughby. It wasn’t severity exactly, and she was behaving in manner appropriate to their situation. And yet he couldn’t help feeling he’d just been put in his place. He didn’t like it one bit.
Perhaps he might try rattling that composure of hers. He raised the famous Gordon eyebrow. “Is this…arrangement…blighting your hopes of romance, perchance?”
A slight movement of her shapely upper lip was the only outward sign of emotion. “No.”
A lick of anger crept up Lucius’s spine. “Then you fully understand that you are agreeing to become my wife. And assume the duties of that position…with all that it entails.”
She surprised him yet again. Her mouth widened into a smile and a chuckle deepened into a throaty laugh. “The duties of that position?”
Lucius blinked. The mask had slipped and with her laughter her face flowered into a unique beauty that damn near took his breath away. But all too quickly she suppressed her amusement and looked him straight in the eye.
“Let us have no misunderstandings, Sir Lucius. I am quite aware of the reason for our…future relationship. You need my money, not to put too fine a point on it. With that in mind, I foresee the duties of the future Lady Gordon as being largely involved with reassuring your creditors that their debts will be paid.”

Author Bio:
Born and raised in England, Sahara Kelly’s love of reading began early and never let up. Even Dickens couldn’t quell her love for the written word and she devoured Jane Austen, Thackeray, Hardy, Daniel Defoe and others, while in school. (She still loathes Dickens.) Moving on to Ian Fleming and Leslie Charteris, she crossed the Atlantic in their company, along with over a hundred Barbara Cartlands and an almost complete set of Georgette Heyers. (She still has these, along with the Bonds and the Saints.) It’s easy to see where the urge to write crept steadily upward and her first novel was published nearly 30 years ago. Since then? Well, “keep ’em coming” is her motto. And she’s sticking to it as best she can.