You are here: Home / Fiction / Joshua’s Awakening by Nick Shaw 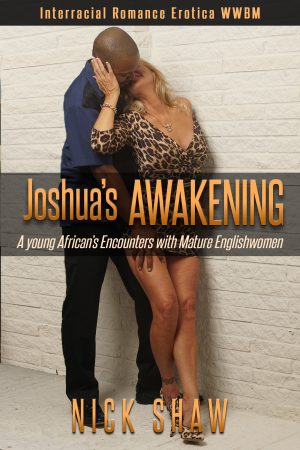 The young African
Joshua, eighteen, has just come to England from Gambia and is short of money. To compound his problem, he has been told that the sponsorship for his one-year training course has been withdrawn. Furthermore, he must find new living quarters since he must leave the hostel where he is staying within a fortnight’s time. He decides to take a train from Newcastle to Durham to meet a Gambian acquaintance to get help and a loan.

At the station, Joshua finds that he does not have enough money for a railway ticket to Durham. In desperation, he turns to the lady behind him in the queue for a loan. Little does he realise that he has set in motion a chain of events that will create a bond between the two.

The lonely English widow
Gillian, fifty, lends Joshua a pound to buy his ticket. When the two take the train together to Durham, Joshua’s exotic allure ignites a new heat in Gillian. Still grieving for her dead husband, she has had no interest in men up to now. After Joshua sees her to her home, she continually fantasizes about the young man.

The Awakening
Although Joshua is also attracted to Gillian, his quest for work and accommodation leads to contacts with several other Englishwomen. Each encounter adds to his sexual awakening but also an increased longing to be together with Gillian.

After a street fight, Joshua makes it to Gillian’s home. She nurses his bruises and they end up making love. Joshua realises that Gillian is the only one with true feelings for him.

Will this couple make it in a world where eyebrows are raised at the sight of a white woman with a black man more than thirty years younger than her?

This contemporary interracial romance contains graphic love scenes and is for mature audiences.

What Inspired You to Write Your Book?
I live in Europe and have been seeing a stream of refugees come in from Africa. Some do not make it and some do. I met an African youth and felt that I had to write a book from his perspective. This black young man later married a European lady and got a job as an electrician. I felt inspired to write a fictional story about an African to comes to England and learns to live with racial prejudice. He relies on his inner strength to survive in this atmosphere and eventually finds sexual fulfilment in the arms of a mature Englishwoman and yet retains links to his home country in Africa. I imagine that many refugees will succeed in doing the same.

How Did You Come up With Your Characters?
I have always been fascinated by contrasts. Therefore, I decided to pair a young black African with a mature white Englishwoman. I provided a back story for each character to understand their motivations for what they did. When they meet, my characters took over the story. In effect, they played out my fantasies in a manner that was in line with their characters.

Book Excerpt/Sample
“Do you wish to sleep with a white woman?”
Bernard’s whispered question excited Joshua. It had always been his obsession to make love to a white woman but he was embarrassed to admit it.
The two African boys, lodged in the Senior Boys Home in Newcastle, were brushing their teeth in the common bathroom next to their dormitory.
Before Joshua could answer, Bernard placed his finger on his lips. Other boys had entered the bathroom to wash up before the lights were switched off at 10 p.m.
When Joshua went to bed, he could not sleep. He thought about Bernard’s question.
Bernard was Nigerian and, at twenty-six, eight years older than Joshua. While Joshua had just been a week in Newcastle, Bernard had already spent a year in England. Probably Bernard had already slept with a white woman.
Joshua tossed around restlessly in his bed, fantasizing about sex with an Englishwoman.
He thought about Miss Ann Richardson, the first Englishwoman he had met when his mother, Anama, took him from their village to Banjul, the capital of Gambia. She was the matron at the Anglican Mission, which had accepted him as a boarder.
It was the first time that he had seen a woman with blonde hair and blue eyes. Although just a boy of ten, she became the object of his puppy love. Miss Ann, as they called her, would become his mentor. Although he attended classes with African teachers, she encouraged him to read English books from the mission library and opened up a new world for him. In the eight years he spent as a boarder at the mission school. he would become closer to this Englishwoman than his own mother.
Anama had moved to Banjul to find work. There she met Mohammed Osman, also from her village, who was working as a barman at The Anchor, a restaurant on the Senegambia Strip, favoured by foreign tourists. Mohammed helped Anama get a job as a cook in the restaurant.
Joshua would visit Anama at work and often peek through the curtain to see what was happening in the restaurant. He was fascinated by the sight of white women or ‘toubabs’, as they were called in the local dialect, in the company of black Gambians.
Many were older European women but they did not act their age. They seemed carefree and joyous, openly kissing their black companions and buying drinks for them. In the Gambian culture, it was socially acceptable for a man to live with a much older woman. Joshua dreamed of the day when he could also meet a white toubab.
Now that he was in England, he felt less confident about his chances of having an English girlfriend. His African friends had told him stories about how the British resented the new wave of immigrants. The atmosphere was hostile.
He was also ashamed of his humble origins. Anama worked as a cook and could barely speak English. She had taught Joshua to respect white people. Aware of his lowly social status, Joshua considered white people to be superior to black people like him. Why would an English girl take up with somebody like him who wore hand-me-down corduroy trousers and worn shoes?
He thought about Mohammed who had helped Anama to get a job at The Anchor.
As a barman, Mohammed served many white customers. Burly and big-built, Mohammed with his shaven head, gold chain around his thick neck and white safari suits made an impression on foreigners. Although purple black, he easily made friends with white women. He helped them find hotel rooms and ganja, the local marijuana weed. A year ago Mohammed married an Englishwoman who had been a regular customer. Six months ago, he finally got a visa to join his partner in England.
Joshua wondered how Mohammed was doing with his English wife in Durham, which he understood was not far from Newcastle. Anama had given Joshua a piece of paper with Mohammed’s address written in pencil. It was barely legible but Joshua was determined to meet Mohammed. Perhaps Mohammed’s wife would introduce him to her younger sister or a friend.
There were other priorities that Joshua needed to settle. The Anglican Mission in Banjul had arranged for an apprenticeship in a Newcastle factory so that he could learn a trade. He still had to meet Father Arthur Skinner who looked after the Senior Boys Home to see when he could start his apprenticeship. He wondered whether he would be up to the mark.
He was also worried about money. The Anglican Mission had given him just a hundred pounds, assuring him that the Senior Boys Home would arrange for a stipend from his future employer. His money was running out and he still had to buy soap and toothpaste.
Joshua could not sleep. Despite his many problems, Bernard’s question still echoed in his mind. Yes, he wanted to sleep with a white woman and was determined to do so.