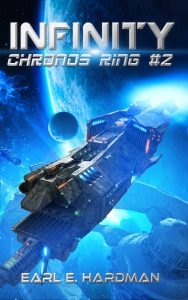 Having saved humanity from an invading alien armada, Ian Lotus finds himself not rewarded but once again on the run – struggling to stay one step ahead of a galactic government intent on his capture.

However, you don’t live as long as Lotus has – well beyond the lifespan of a normal human being – without picking up a trick or two, and Lotus is savvier than most. Catching him won’t be easy. Still, his pursuers have a powerful incentive: their quarry is in possession of secrets that could reshape mankind’s destiny – in particular, the fact that he’s the only person capable of controlling the protective halo of weaponry known as the Chronos Ring, which is humanity’s first and last line of defense against its enemies throughout the cosmos.

But human agents aren’t all Lotus has to worry about. Also hot on his heels is an army of genetically-engineered horrors controlled by an exiled despot from an alternate dimension, who sees Lotus – and in particular, the Ring – as the pathway for both a return to power and the subjugation of humanity. It’s up to Lotus to find a way to stop this menace, before the entire human race is enslaved.