You are here: Home / Fiction / Mystery/Suspense / Illusions of Death by Lauren Linwood 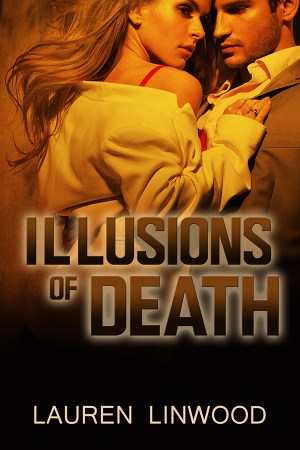 Best-selling author Karlyn Campbell is ready for a new start after her recent divorce from a temperamental artist. When she receives word that her father had a stroke, she heads for Walton Springs with mixed feelings. Broderick Campbell wrote Pulitzer Prize-winning literary novels and denounced his daughter’s work as pedestrian and commercial, causing a rift that finally heals on his deathbed. Karlyn chooses to stay in the small Georgia town to write her popular Matt Collins series and decides to try her hand at true crime when Atlanta’s Rainbow Killer, Roy G. Biv, captures her interest.

Detective Logan Warner’s marriage didn’t survive after he lost his twins to a crazed killer who was never caught. He returns to his hometown’s police force and runs for police chief, happy he’s escaped big city crime and corruption. Emotionally dead, his interest in life is renewed when he falls in love with Karlyn and begins to build a new life with her.

But the Rainbow Killer moves beyond Atlanta, leaving a trail of dead bodies painted in bright hues in several towns north of the city. Leaving no trace evidence or DNA and choosing random victims with no apparent rhyme or reason, Roy proves unstoppable. Then he arrives in Walton Springs, threatening the peaceful town with his murder spree. With a serial killer in their back yard, Logan and Karlyn unite with the FBI to find the killer—before he finds them.

Link To Illusions of Death On Amazon Kindle Unlimited

What Inspired You to Write Your Book?
I love reading books and watching movies about serial killers. One day while flipping through a color chart as I was trying to decide what colors to use to update the interior walls of my house, I was inspired to write about a killer who painted his victims colors of the rainbow. The cops nickname him Roy G. Biv!

How Did You Come up With Your Characters?
I always choose a name first. The name tells me everything – what they look like, what character traits they have. I build from the ground up.

He placed the last of the wet dirt on top of the second grave. Smoothed it with the back of the shovel. Reached for the collection of branches and rocks and leaves that he’d gathered before he began digging. He tossed them haphazardly over his handiwork and stepped back to survey the ground. Perfect. Anyone venturing off the Appalachian Trail this far would have no idea what rested beneath the soil.
If only people knew how much he’d accomplished in his killing time.
He took pride in his handiwork. Years of honing his skill had made him a master of death. He’d started years ago in his teens picking up hitchhikers. Perfecting the art of torture. Perfecting his knife skills. Dismembering the specimens. Learning how to dispose of body parts.
Other hunts followed. Sometimes a single specimen. Sometimes a group. He’d especially enjoyed seeing Atlanta frantic during his series of child abductions and murders. He thought it pure genius to focus on the little ones of public servants. He’d taken the kids of a fireman. A city council member. The school superintendent’s daughter. A cop’s twins. And the piece de resistance? The mayor’s grandson.
His latest specimen gathering consisted of high-end prostitutes. The Chattahoochee National Forest had provided cover for this most recent hunt. Its miles of wilderness proved the ideal disposal area. He’d witnessed the arrival of spring as the area greened up. Watched it blossom into its summer loveliness. Seen the explosion of fall colors come vividly to life as he buried his precious specimens.
But he was at the end of this cycle of murders. He refused to tramp through isolated areas during winter snow. Last night’s kill would be the final in this series.
He chuckled to himself. Plus, the unexpected bonus.
The lone hiker appeared just before dusk settled. He’d already made camp. Set up his tent. The specimen, bound and gagged, waited for him inside. The Rohypnol’s effects had faded. She would know everything that happened from this point on.
Then the kid arrived, sporting a backpack almost bigger than he was. Made himself at home. Admitted he was lost.
They chatted over bottled water and protein bars. The teen spilled that he was traipsing around during Thanksgiving break in hopes of having some majestic, eye-opening experience that would be good enough to write about in his upcoming college admission essay. Everyone these days had come from another country and had to learn English, only to land at the top of their graduating class. Or they’d come from divorced parents and had to live out of a car when the custodial parent was laid off and couldn’t find work. Or they volunteered from everything to food banks to homeless shelters and were homecoming queen and Most Likely To Succeed.
All his classmates had a story to write about. Except for him. He came from a middle class family that had never struggled. The boy had decent grades. Had made National Honor Society. Was vice president of the chess club. That was his undistinguished resume. So he was looking for something life-changing that he could write about.
He’d certainly experienced it. Of course, the kid changed from the living into the dead. Over many hours. As had the whore.
At least the kid wouldn’t be put through the agony of writing that essay. Or being rejected by his top choices and settling for community college and a mundane life.
He returned to the campsite as the rain slacked off to a drizzle. Packed up. He pulled his keys from his pocket. Noticed the rain had stopped. The sky lightened.
And then he saw it. A rainbow in the sky.
Of course. That was it.
Just as God placed the rainbow in the sky as a promise to Noah that He would never flood the earth again, He’d generously gifted him with a new idea.
His next mission would be served as The Rainbow Killer.
Thoughts raced in his head as he planned a new series of murders to commit. The specimens would share nothing in common, making him impossible to catch. But every murder would end in spectacular colors. In hues of the rainbow.
Confidence pulsated through him. This could be his claim to fame. A lasting legacy.
He couldn’t wait to begin.

Author Bio:
I’ve written 9 total romances – 7 historicals (medieval & western) and 2 romantic suspense novels. I do most of my plotting while walking every morning.

I eat dark chocolate daily, watch as many movies as I can, will cry when Downton Abbey and Game of Thrones both come to an end, and have never met a piece of bread that did not call my name.

Link To Illusions of Death On Amazon Kindle Unlimited