You are here: Home / Fiction / Mystery/Suspense / Hunter Down by Jerold Last 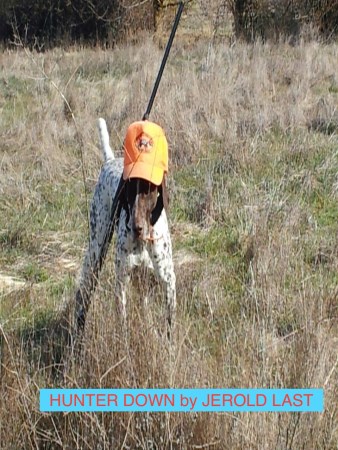 A high powered rifle shot rings out in the early morning stillness at a hunting preserve in Southern California leaving a hunter down, launching Roger and Suzanne into another suspenseful mystery thriller. In a complex whodunit set against a backdrop of pointing dogs and canine hunt tests, Roger has to solve a murder case with no clues, no suspects, and no apparent motive. Suzanne has her hands full handling their puppy Romeo at the Junior Hunter level, while Romeo’s mother, Juliet, is attempting to qualify as a Master Hunter with a professional handler. There’s lots of action as the dogs hunt birds and the humans hunt for a cold-blooded killer. Dog lovers, mystery fans, German shorthaired pointer owners, and fans of the Roger and Suzanne mystery series will especially enjoy this novel.

Link To Hunter Down On Amazon Kindle Unlimited

What Inspired You to Write Your Book?
My wife, Elaine, who breeds, shows, and hunt tests German shorthaired pointers. She invited me to introduce Roger and Suzanne to her world of canine activities as a backdrop for a suspenseful thriller. In return, she acted as my technical adviser and editor for this mystery novel. This novel also brings back the main characters, human and canine, from The Deadly Dog Show, so serves as a sequel to one of the best-selling entries in this series. Finally, I had a lot of fun grafting personalities onto the different breeds of dog who do guest appearances in the story.

How Did You Come up With Your Characters?
Juliet and Romeo, the featured dogs, are very similar to our own Jolie and Ries, so creating their characters was easy. Roger, Suzanne, Bruce, and Vincent are regulars in the series, so they were already there waiting to participate in another mystery novel. We first met Jason in Unbearably Deadly and I liked his character, so he received an invitation to play a major role in this story. The new characters introduced for the first time in this novel are purely fictional, but maybe one or two of them will be back for another book in the future.

Book Excerpt/Sample
Don reached out to hold Janet’s hand over a particularly rough stretch of unevenly plowed field. “Berbel is really full of herself today,” he said looking at their dog bouncing along in the field several yards in front of them. “Maybe she’s celebrating our anniversary, too. If she brings this much energy to today’s test we’ll see her qualify easily.”

She sat down in the grassy field.

“Are you all right?” asked Don.

“I think so,” she replied. “How would you feel if I just walked back to the car, drove home, and got my ankle up on a foot rest for an hour or two? I could come back and pick you up for a late lunch after the hunt test is over.”

“Let me walk back with you, just in case that ankle is worse than you think. And you don’t have to drive back out here. I want you to feel your best at dinner and the show tonight. I’ll hitch a ride with one of the club members at lunch time after the tests are finished.”

They walked back to the car and kissed good-bye.

Don Leone checked his wristwatch. 6:30, which left him just about enough time for one more run across the backfield with his dog. People would start showing up about 7 and expect the field to be clear. Man and dog started out, the pointer running about 150 yards for every 20 yards her human walked through the field. Don blew one long and two short blasts on the whistle hanging from the lanyard around his neck. The dog responded immediately, coming in toward him to re-establish closer contact. Don Leone blew two short blasts to release the dog to restart the hunt and continued walking toward the far end of the backfield at a brisk pace. Berbel was running in front of him casting into the light breeze coming in their direction.

A young and inexperienced dog like Berbel enjoyed chasing any fast moving potential prey seeming to run or fly away from her. This included just about any bird or rodent other than the chukar she was supposed to hunt. Sure enough, she ran over a few little songbirds sitting on a small bush. They immediately took off in the direction the hunter and his dog were walking. Berbel instantly began to run after them. Don Leone quickly blew one long and two short blasts on his whistle. The dog responded immediately, returning to her master before beginning to cast into the breeze in front of him again. The hunter smiled in satisfaction, scratching Berbel behind her ears, as his dog responded perfectly to his command.

By then Don Leone was just about at the far end of the field. He checked his watch and decided it was time to get off the field and find some place where he could buy or scrounge a cup of coffee. He started to turn when he suddenly stumbled and pitched forward into a ditch. He lay still for more than a second before the sound of the gunshot would finally have reached him had he still been alive. But he wasn’t.

It was going to be just a few more hours before Suzanne would find Don Leone’s body, propelling me into one of my most difficult cases. I’m Roger Bowman, a private detective living and working in Los Angeles. Suzanne is my wife. But we have to go back a couple of weeks before this morning to understand how we came to be in Prado Park running our German shorthaired pointer, Romeo, in his first hunt test just in time to get involved in this murder case.

Author Bio:
The author is a Professor of Pulmonary and Critical Care Medicine at the University of California’s Medical School at Davis, near Sacramento in Northern California. Jerry writes “tweener” mystery books (tough mystery stories that follow the cozy conventions of no graphic sex and no cussing) that are fast moving and entertain the reader. Several of the books introduce the readers to South America, a region where he has lived and worked that is a long way from home for most English speakers. He and his wife Elaine lived previously in Salta, Argentina and Montevideo, Uruguay. Jerry selects the most interesting South American locations he found for Roger and Suzanne to visit while solving miscellaneous murders. Montevideo, Salta, Machu Picchu, the Galapagos Islands, and Iguazu Falls are also characters in these books, and the novels portray these places as vivid and real. Jerry and Elaine breed prize-winning German shorthaired pointer dogs; Elaine also provides technical advice for Jerry’s dog-related novels like The Deadly Dog Show and Hunter Down, as well as editing for all of the books.

Link To Hunter Down On Amazon Kindle Unlimited