You are here: Home / Bargain Books Under $3 / High Hopes by Sue Lilley 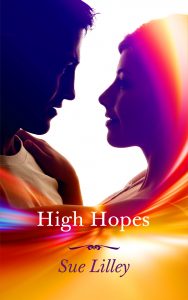 Grace, Sam and Dixie have known each other forever. But Grace has a secret.

Pregnant and penniless after one drunken night with Sam, she gave up her baby for adoption without telling him. And condemned herself to twenty years of guilt.

When her daughter traces her, out of the blue, Grace longs to meet her. But she’s asking about her father and if Grace confesses to Sam after all these years, it will surely wreck his marriage to Dixie.

How can their friendship survive such a betrayal? Yet does Grace have a choice?

What Inspired You to Write Your Book?
I’ve long had a fascination for secrets, how people go to great lengths to hide things and what happens when the truth comes out. In High Hopes, three old friends are confronted with a secret from twenty years ago. An adopted child traces her birth mother. The father knows nothing about her and if the truth is revealed, it could shatter his happy marriage and a life-long friendship.

How Did You Come up With Your Characters?
I try hard to make my characters realistic. I want them to have human dilemmas and to make mistakes. The situations I write about are always real-life but hopefully without the boring bits. High Hopes revolves around Grace and Sam who have known each other so long, they’re as close as family. Yet maybe they don’t know each other at all.

Book Sample
Grace glared at them. Sam didn’t bother to move his hands. If anything, he pulled the girl harder against him, a defiant glint in his eye. Grace had never seen Sam look like that. He looked hungry. And strangely sexy in his own dishevelled way.
The girl kissed him, her lips deliberate as she kept her eyes on Grace. Grace wanted to slap the smirk from her face but when Sam made no attempt to kiss her back, the girl shrugged and eventually slunk away.
“Why did you tell her you’d been dumped?”
Sam grabbed at the bottle precariously balanced on the fruit machine. “What would you call a dirty weekend with your ex?”
“That’s stupid,” Grace laughed. “Dixie went to his twenty-first party. Big deal. It’ll be your turn next year. Who will you invite from school?”
“That’s easy.” He combed his fingers through his untidy shock of black hair. “I was the school odd-bod, remember? There was only you.”
She remembered, even through the drunken haze of too much vodka and champagne. It had always been the two of them. Until Dixie. And then there were three.
“Here you are, like a mermaid in your sexy see-through top.”
His hand was on her arm, the heat of him, next to her breast, the nipple poking through the thin fabric of her top. It was suddenly hard to breathe.
“Dance with me?”
It was a slow number, barely recognisable over the raucous beat of the party. Sultry, though, throbbing through the wooden floor, up through the soles of her feet to thud against her heart.
“Our song,” he whispered against her hair.
Black Velvet, she recognised it now. Remembered Sam’s crush on Alannah Myles. Felt strangely thrilled that Sam had called it their song. They’d always had each other. And Sam was right here, kissing her for the first time, an intense meeting of lost souls. It had always been their destiny to be together.
***
Danny was strangely riveted. “What happened next?”
“I can’t blame Sam. I totally seduced him.”
“You’d be pretty hard to resist, twenty years ago. Not like now, with your puffy red face and mascara filling your wrinkles.”
“How can you make me laugh at a time like this?” She fished another tissue out of her bag. “I need to start buying waterproof mascara.”
“Here, let me.”
He licked the tissue and applied it to the streaks on her face. For once, she was too exhausted to care what she looked like as she snuggled into the warmth of his shoulder, staring at the gulls as they wheeled and whooped above the harbour.
“I’m guessing you got pregnant? What did he say?”
“He didn’t know. But now I have to tell him everything because his daughter wants to meet him.” Another tear escaped down her cheek. “Everybody’s going to hate me.”
***
They’d loved each other all through that one stolen night, right until the first glimmer of watery daylight. Even drunk on vodka and champagne, Grace had never felt more alive. Sam was her soul mate. How had she never known that before?
When she woke up, Sam had gone out. He stayed out for hours and when he came back, he turned on the TV without saying a word.
“I made chilli. Something to do, left here on my own.”
“I already ate, thanks. Hangover munchies, you know how it is?”
She sat on the arm of the sofa, sick with dread. “What’s wrong?”
“You know what’s wrong. Listen, I’m sorry. But please can we not talk about it again?”
Still, he didn’t look at her. He couldn’t be sorry. He must see they were meant to be together. She stroked his arm but he shrugged her off, leaning as far away from her as he could get.
“Look Grace, stuff happens. I’m not sure how I ended up in your bed but the sooner we can forget about it the better. When Dixie comes back, Christ! This would kill her. Don’t even think about telling her.”
“But last night you said she’d dumped you.”
“Well today, I know I was being a tit. I’ve spoken to her. She’ll be back tomorrow, as planned. We’re fine.”
“What about me? Should I just disappear? Everything hunky-dory because you and Dixie are fine?”
The sarcasm bounced off him. He’d reduced their connection to a drunken fumble. A mistake he didn’t want to pick over. Dixie returned to claim Sam’s bed as well as his heart and nobody noticed how distraught Grace was. She’d never been more lonely.
By Christmas she knew she was pregnant.