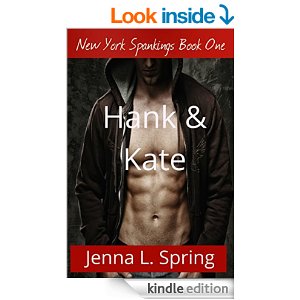 When 42-year-old Hank Reilly overhears beautiful, young Kate Stockton bemoan the lack of real men to discipline and cherish her, he feels an instant connection. Their age difference worries him, but the couple forges forward with love and over-the-knee spankings. However, both Hank and Kate are keeping secrets from each other. Will their lack of trust and honesty tear them apart?

Although characters overlap, each book in the New York Spankings series contains the stand-alone story of one couple’s adventure with love and spankings, both fun and disciplinary.

This book contains adult material, including the consensual spanking of an adult woman. If such material offends you, please do not read this book.

What Inspired You to Write Your Book?
Walking around Clove Lake Park, I had a vision of a handsome older man with a beautiful younger woman who craved dominance.

How Did You Come up With Your Characters?
As a reader, I enjoy dominant males with a heart of gold. Hank isn’t perfect, but he is a good man. As for Kate, after reading and enjoying so many books set in the west, I thought it would be fun to write about a young woman in a major city who wants to submit to a kind, dominant man.

Book Excerpt/Sample
“I guess you’re taking this breakup ha-hard, huh, Kate?” Oksana slurred as she downed the rest of her pink beverage.

“Nah, not really,” Kate answered. “Eric was a bit of an asshole. I didn’t really like him. I never do. There are no real men in New York.”

Hank almost burst out laughing at this broad statement, but he looked down at his beer so he didn’t interrupt the intellectually charged discussion.

“Of course there are! You’re just too too picky, Katie,” Oksana said. She motioned to the bartender for another drink. Despite rules that prohibit bars from selling alcohol to visibly intoxicated patrons, the bartender made her another. She rewarded him with a smile and a five dollar tip. “Besides, what would a ‘real man’ do if he saw you here at this bar, drinking like a fish and cursing like a soldier?”

“You mean sailor, right?” Kate asked, then she burst out laughing. “Cursing like a soldier! You’re funny, Oksana. I’m so glad you’re my roommate. And no, a real man wouldn’t be happy at all. There would be con-se-quen-ces,” she said seriously, her arm around Oksana as she sounded the word out.

“Oooh, consequences. What would he do, ground you?” Oksana asked with a giggle.

I know what I’d do. I would take you back home, help you sober up, and spank you until you couldn’t sit for a week. Hank looked up at the television screen, feigning disinterest in the women’s conversation.

“Ma-ma-maybe,” Kate slurred, “but first he’d whip my behind until it hurt to sit down.” Oksana looked at her friend incredulously. Hank nearly spit out his beer, shocked at how Kate’s words mirrored his own thoughts.

“Spank you? How kinky. I didn’t know you were into that stuff, Kate. Here you are, all fancy-pants, working in a law office and applying to law school, and you’re little miss kinky-face.”

“I guess,” Kate said. “The idea of a spanking is a turn-on, but it would be more than that. My dream man would have rules, and I’d get a red backside if I didn’t comply. Not like an asshole, just kind of protective-like. But it doesn’t matter. There’s no men like that in New York. They’re all out west, in Colorado or Wyoming, ranchers and cowboys, and I don’t like cows.”

Author Bio:
Jenna L. Spring is an indie author who writes about feisty women and the strong men who love, cherish, and spank them. Flavored coffee powers Jenna through her days, particularly chocolate and cinnamon cupcake. She loves hiking, reading, writing, and spending time with her husband and children.