You are here: Home / Fiction / Fantasy / Flight of the Vessel by Robert Clifton Storey Jr 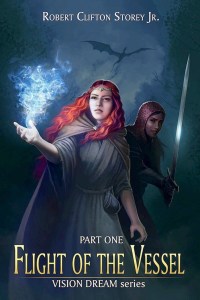 The evil one snatched away her homeland, killed her family, and changed her peaceful way of life forever… but he could never stamp out her spirit or her magic…

On her nineteenth birthday, Angelterra, princess of Palzintine, finds her peaceful existence shattered by an invading horde. Shutharja, a sorcerer and cleric of the Fallen Spirits, unleashes his war of shock and plunder against the kingdoms surrounding the Imperial Sea in his pursuit of ultimate power.

With her beloved kingdom captured and her dear parents presumably slaughtered in the failed defense of her homeland, Angelterra and her wheatish-skinned protector, a lady knight named Jeela, must flee Palzintine. During their desperate flight, these two young women are continually hunted by monstrous beasts and dark agents of Shutharja. Angelterra and Jeela must find a way to reunite with the rest of their countryman, who are now refugees, huddled in a neighboring kingdom. Along the way, she collects an assortment of allies and friends to help her fight back against this menace that has swallowed her land and threatens all the kingdoms of this world.

Out of the necessity of her survival, she discovers the wondrous mysteries surrounding “First Magic” and what it means to bind with its essence and wield its power. She begins to ponder if she is indeed the unthinkable, a wizard herself. Then, in an intense and lucid dream, the “Vision Dream,” from beyond the realm of man and magic, Angelterra is given two very cryptic quests by the Spirit of the Heavenly Father for her to unravel. She is convinced that these two quests hold the key to defeating, once and for all, the evil which Shutharja has unleashed upon the world. She learns that by the Infinite Spirit revealing such quests to her, and her alone, means that she has been chosen to be His next “Vessel.”

Link To Flight of the Vessel On Amazon Kindle Unlimited

What Inspired You to Write Your Book?
I was staring into a pan of parts, so of which I had pressed into a broaching machine, when I noticed the parts formed what looked to be a mountain chain. Factory work is monotonous and I had plenty of time to daydream. And that’s how I began to build the word in which my main Character, Princess Angelterra, lives.

How Did You Come up With Your Characters?
Strangely, they sort of came to me, not the other way around. I first envisioned this story with male character, but I female relative sort of took over and wished to have her story told. It’s hard to argue with a princess.

Book Excerpt/Sample
Then, the small article her father had given her at the Delar Ravine to safeguard suddenly flashed into her mind. He had cautioned her to reveal it only when she was sure the time was just right. With the life of her lady-in-waiting, her cousin, her friend hanging in the balance, had that time finally arrived? If she divulged this secret, she knew that it would change everything. It would be the final nail in her parents’ coffin. With its revelation, she would be admitting to all that they were truly gone, gone forever. A dreadful sadness started to well up in her, but in another part of her heart, a tiny part that was still filled with hope steadfastly refused to believe that fate. That part of her clung tightly to the notion that her loved ones had indeed survived the onslaught of the enemy, and with the help of that part of her, she pushed down the sadness. Rolling the small article in her fingers, she began to doubt herself.
Can I really do this? Can I bear this duty, this heavy, heavy duty?

Author Bio:
Born in Detroit in the late fifties, I lived first on the Eastside in a small flat. We moved every few years until we finally migrated all the way over to the Westside, and not far from the famed Eight Mile Road. While growing up in the Motor City, I loved to play games that relied on my imagination. I really enjoyed pretending to be a cowboy when I was very young. Westerns were big in those days, and I watched a lot of the Lone Ranger, Cheyenne, Zoro, and the like. And I loved my plastic holsters, plastic bullets and real smoking cap guns. As I got a little older, I developed such a fascination with space that it bordered on an obsession. The space race with the, then, Soviet Union, was in full swing. I spent a lot of time pretending to be an astronaut. I was in heaven when I received a Mattel Matt Mason action figure. I was glued to the TV watching such shows as Lost in Space, Thunderbirds and, of course, Star Trek. All these shows help to grow my imagination. Of course, I was caught up in the British invasion of music in the sixties like everyone else. And dreamed of becoming a rock star…perhaps the first rock star to the moon.

In school, I found I loved to write stories. I kept a notebook dedicated to just that. Writing was a way to free my imagination and let it run wild. I thought books were the greatest invention ever, and I still do. The first book that had a really deep effect on me was Flowers for Algernon. In school, I read the Hobbit and the Lord of the Rings both of which sent my imagination into overdrive.

At the age of twenty, I joined the U.S. Navy, working on aircraft electronics. I spent six years serving with an A-6E bomber squadron (this bomber is now retired. Boy, that makes me feel old) stationed at Whidbey Island Naval Air Station. I deployed aboard first, the USS Enterprise and then later on the USS Coral Sea aircraft carriers, cruising the western Pacific to ports in such wonderful countries as

Writing aboard the USS Enterprise, the Philippines, Korea, Singapore, Australia, and Hong Kong. There are not many places to go on an aircraft carrier, so I took up reading. And I read and read and read. Heck, I was walking on the hanger deck arround dozens of aircraft that were being repaired reading away (a dangerous thing to do) when I walked straight into the open hatch of an F-14 and landed square on my behind. Now that is suffering for your art. I was also writing while cruising the oceans for months. Every night I would sit off to one corner of my berthing compartment and write for hours.

After discharge, I decided to go to college and learn a thing or two about writing. I enrolled at Western Washington University in Bellingham, WA, and studied English, Literature and several writing styles such as novel, short story, and playwriting. I joined the Naval Air Reserve to help pay for college and became a Navy Journalist, writing news and feature stories for a tiny military newspaper.

After a few years, I left Washington State for Columbia, SC to help my family in their small businesses. A couple years later, I met someone who lived in Virginia and decided to move here. I started to work as an ad designer for a small daily newspaper, which covers the Shenandoah Valley areas called the Northern Virginia Daily in the late nineties. I moved up the ranks there to become the director of technology responsible for technology strategies and planning; purchases and financing for technology capital expenditures; vendor negotiations and relations; server, network, and security administration and so on. I decided to start a family, and we raised two wonderful sons: one who is now 14 and one who is 9. I did manage to write a little, but not as much as I would have liked.

Link To Flight of the Vessel On Amazon Kindle Unlimited