You are here: Home / Fiction / Mystery/Suspense / Five Quickies for Roger and Suzanne by Jerold Last 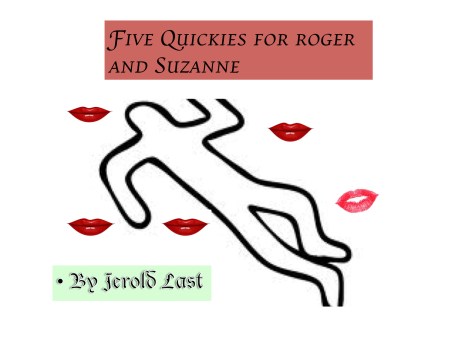 Five Quickies for Suzanne and Roger is an anthology of shorter stories featuring characters from the popular South American mystery series of novels, including Roger’s first case and how Suzanne and Roger meet. In this novel-length collection, Roger and Suzanne solve cases in Salta, Argentina; Fortaleza, Brazil; and Los Angeles, California in a novella, a novelette, and three short stories—five quickies. Three obvious murder victims, two additional dead bodies, and a mysterious dog add spice to these stories. The five stories give you five times as many chances to see if you can deduce whodunit before Roger and Suzanne do. Good luck.

What Inspired You to Write Your Book?
I’ve experimented with writing different formats in addition to the novel—short stories, novellas, and very short stories. I’d accumulated enough shorter stories featuring Roger and Suzanne to fill a book, so decided to pull them together. Here we are with that book—five shorter stories, the five quickies of the title—a novella, a shorter novella, and three true short stories.

How Did You Come up With Your Characters?
Roger is a composite of the tough P.I.s from the classic mysteries I love to read. Suzanne, at least her professional career, is based on my own experiences. Most of the South Americans are based on composite characters of friends and acquaintances I met when I lived and visited there, or fictionalized versions of real people I know.

Author Bio:
The author is a Professor of Pulmonary and Critical Care Medicine at the University of California’s Medical School at Davis, near Sacramento in Northern California. Jerry writes “tweener” mystery books (tough and dark mystery stories that follow the cozy conventions of no graphic sex and no cussing) that are fast moving and entertain the reader, while introducing the readers to a region where he has lived and worked that is a long way from home for most English speakers. He and his wife lived previously in Salta, Argentina and Montevideo, Uruguay for several months each. Jerry selected the most interesting South American locations he found for Roger and Suzanne to visit while solving miscellaneous murders. Montevideo, Salta, Machu Picchu, the Galapagos Islands, Fortaleza, and Iguazu Falls are also characters in these books, and the novels portray these places as vivid and real.