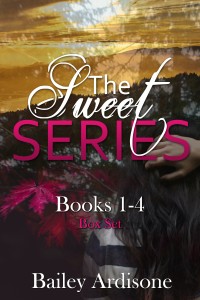 About The Sweet Series Box Set: Books 1-4 by Bailey Ardisone

This is the story of two girls on opposite ends of the spectrum.

Nari is a simple girl with a difficult start in life, but her world grows unbearably harder once she meets Mycah — a boy being chased by two kinds of evil; a boy who Nari is convinced is either the devil or an angel. But she was wrong. He’s something completely different. Now it’s too late – there’s no turning back once she’s secretly intertwined with a dying kingdom and that mysterious, dangerous boy destined to protect it.

Then there’s Namine, an elf in a different realm who is secretly tasked with a mission that could destroy their already dying kingdom if she should fail. She has the weight of the world on her shoulders, but the one thing she didn’t plan for threatens to ruin it all – falling in love.

Once the two realms collide, it proves to hold Nari and Namine’s most difficult tasks yet: Killing the false king before their kingdom is destroyed forever, and even worse, resisting forbidden love that consumes them. Will they do it? Or will they give in to temptation and let their kingdom fall?

Split between their forbidden love and saving their people, it’ll be a fresh take on elves you won’t ever forget.

This box set contains all four books in the Sweet Series:

This young adult book is available in eBook format.