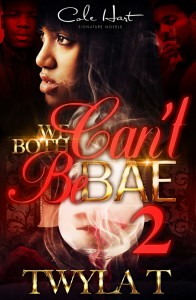 About We Both Can’t Be Bae 2 by Twyla T

We Can’t Be Bae Part 2 Synopsis
Cameron has been playing a dangerous game of balancing two bae’s. She was successful at her trade until she carelessly sent photos to Phebe which were then leaked back to Cameron’s husband Malcolm. Once he got news of her infidelity, he wasted no time in rushing home with thoughts of murder ringing in his head… and a plan to carry them out. Was he successful in his attempt?
Keith has been Cameron’s secret lover for some time now, but his fiancé Phebe is tired of playing house with him and wants a ring. Will he marry her or will he dump her and play second to Malcolm forever?
Charlotte has always been envious of her sister, but no one ever really knew why until Malcolm helped Cameron put those particular pieces of her life together. How long will this love triangle last before someone gets hurt?
Secrets and lies keep spilling and it’s another crazy, sexy, and dangerous roller coaster ride that will either make or break Cameron.