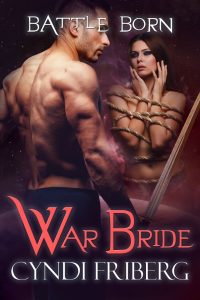 Battle Born Prequel: Skyla’s prophetic dreams aren’t enough to keep her from being captured by a fierce Rodyte general, but they help her understand what he wants and why he needs her so desperately. She’s now his helpless captive and must decide if she’s brave enough to teach this embittered soldier how to love again.

Tragedy, and years of war, have hardened Kryton Lux, made him ruthless and unfeeling. He’s fascinated with his new captive, ready and willing to seduce her curvaceous body. His heart, however, isn’t part of the bargain. She will submit to his sexual demands and when their time together has concluded, she will return to her homeworld and he will never think of her again. Luckily for Skyla, fate has a far different plan for this stubborn general.

This Erotica Paranormal Romance book is available in these Formats: eBook