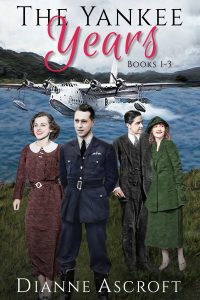 About The Yankee Years Books 1-3 by Dianne Ascroft

After the Allied troops arrived in County Fermanagh, Northern Ireland during the Second World War, life in the quiet, rural county would never be the same again.

The Shadow Ally: June 1941 – Can Ruth Corey safeguard a military secret and protect her beau?

Acts of Sabotage: December 1941 – Can Ruth and American civilian contractor, Frank Longo, stop the acts of sabotage that threaten the military project and what does the future hold for the two of them?

Keeping Her Pledge: June 1942 – Can Pearl Grainger keep her pledge to do her bit for the war effort without losing the RCAF airman she loves?