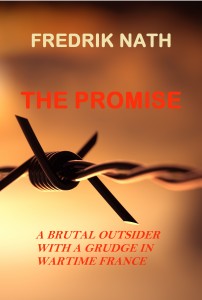 Jean and Rebecca, whose parents have died, journey back to France from Brazil – desolate. Rebecca has an on-board romance with an older right-wing Frenchman, Philippe Darnand. Despite Jean’s reservations, Rebecca marries Philippe but Philippe, who is viciously right-wing, wants to further his career in the Milice. He gives up Rebecca and her baby to the Nazis. Now Jean, taught to kill by S.O.E. and disdaining restrictions set by the French resistance, is compelled to exact his vengeance as an outsider. A ravening grudge bearer, Jean rescues the beautiful Nicole from the Sicherheitspolitzei’s clutches in Bergerac and they travel to Paris – a little stop over to bring his plans to fruition. He returns to England under a cloud but his promise to always protect Rebecca eats away at him and in the end, he risks all to keep that promise in an impossible mission deep into enemy-occupied Poland.

This book is available in both print and ebook format.