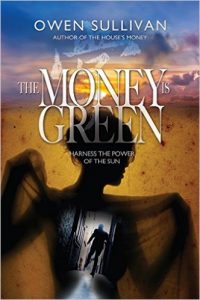 About The Money is Green by Owen Sullivan

After losing his wife to an affair, along with the electrical contracting company he built, Jason Ballard is experiencing life at its cruelest. In a desperate attempt to get back on his feet, he takes a job at Soltech, a thriving solar panel company based in Shanghai, only to discover all that glitters is not gold.

Mei Chen the seductive wife of the third highest-ranking official in the Communist Party, owns and operates Soltech with an iron fist. An industrious and successful business woman, she makes not attempt to hide her excessive wealth or shy away from her controversial opinions. Although extremely powerful, she yearns for more…wealth, status and above all more power.

Leave it to the United States Congress to throw open the doors to the vault. With literally billions of dollars slated for “green energy” projects, Mei Chen stands boldly at the front of the line to grab as much of the “green money” as she can. Jason, realizing too late that Mei is a ruthless adversary and will stop at nothing…risks his very life to oppose her.