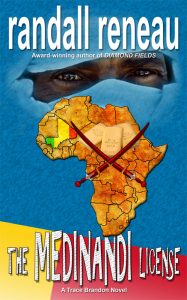 About The Medinandi License by Randall Reneau

Geologist Trace Brandon has been in Mali less than two months. He’s nearly been killed twice, lost a drilling rig to a well-placed RPG, and fallen for Peace Corps volunteer Molly Wainwright . All pretty much SOP for West Africa, until his friend Gordon Watson is brutally kidnapped by Al Qaeda .
Running out of time to meet the ransom demands, Trace turns to a Malian arms dealer and a French-Canadian ex-mobster for help. Together, they come up with a risky, highly illegal scheme to rescue Gordon.
If the plan goes south, Trace knows he could end up in prison—or the Bamako expatriate cemetery on Rue de Dakar . . .