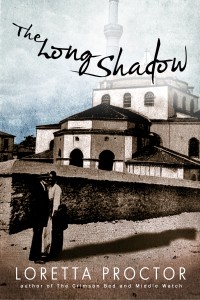 About The Long Shadow by Loretta Proctor

The Long Shadow is compelling historical novel which tells the human story of the Allied campaign in Salonika during WW1 and will appeal to readers of The Island and The Thread.

Fourteen-year-old Andrew discovers his mother’s hidden diary at his grandmother’s home during a Christmas gathering. His eyes are opened to a family secret when he reads about her time as a nurse in Salonika during the First World War, and the tragic love affair she had with his father, a Greek Officer who died in battle. Four years later, Andrew is impelled to visit his father’s land and trace his roots. What – and who – he finds there will change his life forever.
The Long Shadow is filled with descriptions of Greece and its people. Dramatic images of battle and the terrible conditions endured by the Allied Armies entrenched around Salonika in the “Birdcage” are authentic and vivid. Greek music and dance play a vital role, reconciling in Andrew the dichotomy of belonging to two very different cultures and helping him to unite them in his heart and soul.