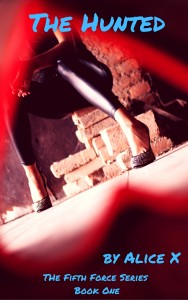 About The Hunted: The Fifth Force Series – Book One by Alice X

Just imagine… falling in love with a man

The same man who guards your prison cell

Then ask yourself… what would happen

If that man fell in love with you too?

It’s the year 2085 A.D… and a full-scale war has broken out between the witches and the witch hunters.

The government will not stop until the last witch has been captured and Cleansed of their powers.
And make no mistake… witch hunters are everywhere. The armed soldiers of the government’s Orion Task Force have orders to capture witches off the street and shoot those who try to flee.

And even if you evade the men with guns, you’re still not safe. Your closest friends and neighbors might be clandestine witch hunters… vigilantes who believe it’s their civic duty to turn witches in to the Task Force for punishment.

Ava Edwards is a witch on the run. Her powers were passed down to her from her father. Now her whole family is guilty of witchcraft unless they can prove their innocence to the Task Force’s satisfaction… which is not bloody likely!

Ava is captured and sits brooding in a tiny prison cell. Days of soul-crushing boredom and isolation are interrupted by random interrogation sessions… and encounters with The Machine, an unspeakably sadistic device that breaks the will of prisoners who dare lie to the Task Force.

Despite their differences, a connection begins to form between prisoner and handler. Maybe it’s the way Thomas takes risks to spare Ava from punishment. Maybe it’s the kindness and decency that Ava senses beneath Thomas’s cold exterior. And perhaps Thomas secretly admire Ava’s unbreakable will and unsinkable devotion to her family.

Whatever the reason, an intense and passionate bond undeniably exists between them. And it yearns to be consummated with all the urgency and electric energy that comes with a new love that dare not speak its name!

But should Ava fully trust Thomas? Is his love for her sincere, or is he playing a deeper game? Has Ava fallen for a cunning young witch hunter who will use any insidious trick in the book to get her to betray her father?

There’s only one way to find out… start reading The Hunted by Alice X today!

This romance book is available in ebook format.