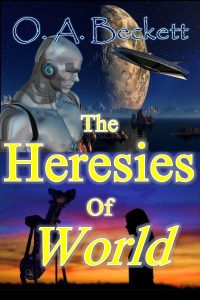 About The Heresies of World by O. A. Beckett

Limited Time FREE Promotion! Get The Heresies of World FREE on Amazon Kindle from Oct. 24th to Oct. 28th.

The place is known only as “World.” The time is unknown. A devastating, centuries-long war has severed humanity’s connection to the past, leaving all knowledge of history scattered in fragments. Now the war is over, and a ruthless, authoritarian Empire has risen to power, dead-set on crushing all dissent and hoarding whatever information remains.

Kaeylor Lirin is a brilliant young scientist with a burning curiosity and a rebellious nature. She has been tasked with investigating mysterious changes in the climate that may threaten the stability of the Empire. But she has an agenda of her own. Using her wits to bypass Imperial surveillance, she has embarked on a solitary quest to unearth the past in order to understand the present and hopefully to decipher clues that may point to a better future. But when her sister, long presumed dead, resurfaces as a leader of the underground resistance, Kaeylor must choose between protecting her family and fighting for freedom. A subterranean war is underway, and as it reaches a fever pitch, the Empire will employ all the firepower in its vast arsenal to maintain its grip on power. Caught between the people and the rulers, the rich and the poor, the weak and the powerful, Kaeylor will have to face murderous drones, corrupt strongmen, fickle droids, and brutal mercenaries if she has any hope of saving herself, the ones she loves, and World itself.

The Heresies of World, the first installment in the World series, is a dark, complex, and dizzying sci-fi-thriller, a volatile mix of mystery, space opera, political intrigue, macabre humor, and gripping drama that will leave you thirsting for answers. But in this World, every answer provokes two new questions…

This SciFi book is available in these Formats: eBook