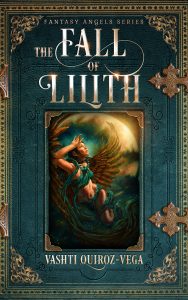 About The Fall of Lilith by Vashti Quiroz-Vega

The Fall of Lilith is a dark and epic fantasy about the origin of angels, demons and other supernatural beings. The new spins on heaven and earth and angels and demons make this a unique and fascinating read.

In the beginning, God created angels. His companions reside in Floraison, a beautiful and joyful location in the lowest level of heaven. Though given free will, they must be obedient and remain chaste. For the angel Lilith, this is a difficult proposition. Though she longs to be first in God’s eyes, Lilith questions the rules. Her slyness and disobedience cause turmoil and division among the angels. When God sorts the angels in a hierarchy, Lilith is unhappy. When God creates humans, Lilith is enraged and jealous. She sows the seeds of an uprising, eventually seducing Lucifer and encouraging him to revolt against God. A vicious battle ends in defeat for Lilith, Lucifer, and their allies. They are cast out of Floraison and banished to Earth, changed in form and ability. Some are given monsterlike characteristics, including Lilith, who is now half serpent. Lucifer becomes Satan, complete with red visage and spiky horns. The fallen angels struggle to find each other and battle to survive on the alien planet. They are vulnerable and able to be wounded by elements in their ecosystem. Though the angels can now enjoy pleasures of the flesh, it’s often violent and painful, especially for Lilith. Rather than experience heaven on Earth, the fallen angels lie, deceive, and suffer. Lilith craves revenge upon God, the angels, humans, and ultimately Satan himself. Quiroz-Vega offers a dark creation tale, a prologue of sorts to Adam and Eve. It’s a compelling narrative that provides background on several well-known, supernatural figures. Though obviously religious in nature, Quiroz-Vega’s book strays far from traditional biblical text. Sea monsters, mermaids, and vampires share the stage with angels and demons. And illicit (and explicit) affairs, violent battles, and graphic injuries abound. Quiroz-Vega’s prose is incredibly descriptive. The fallen angels, including a transformed Beelzebub, whose “arms and legs appeared gelatinous, punctuated by lumps of broken and calcified bone,” are painted with horrifying clarity.