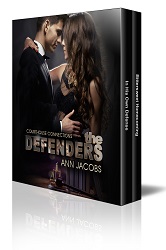 Tony Landry, born in poverty and driven by his family history, has achieved amazing success as a defense counselor through no one’s efforts but his own. Newly made a partner in the prestigious Winston-Roe firm, he fully believes that truths come not in black and white but in shades of gray. He clashes with Kristine Granger, a young prosecutor from a background of wealth and privilege, who is fully convinced that there are no shades of right and wrong. Despite the fierce attraction neither can deny, Tony must make the argument of his life to win Kristine’s heart—IN HIS OWN DEFENSE.

Gray Syzmanski, one of Tampa’s elite, grandson of the founding partner of Winston-Roe, chose the DEA instead of a position with the law firm, only to go through hell. Eight years later he returns to what is at best a BITTERSWEET HOMECOMING—and the job he refused before his ordeal. Andi Young, a prosecutor he had a brief liaison with before his ordeal, is still there and miraculously still wants him. The young couple who felt MORE THAN LUST but had no opportunity to explore their feelings then, now have a chance to have it all—if only Gray can accept that it’s his mind and heart, not a perfect body—that makes him her perfect mate.