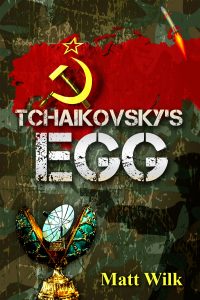 About Tchaikovsky's Egg by Matt Wilk

The false Faberge Eggs, protected from inspection with the immunity given to Priceless Artifacts. They conceal Russia's response to the man with the football, the initiator switches to Death's Hand, the world's second remote controlled nuclear arsenal. To get his hands on it, the most ruthless ex-KGB madman will do the unthinkable.
Clara Puravich narrowly escaped the collapsing Soviet Union. Martin Forn could not have found a better mother for his children. Now, Eli, Sara, and even Johnny Corn have been kidnapped by their old enemy. Code name Gregor should have stayed out of Indiana. As for Huntington, and their neighbors- The Shawnee- it’s no holds barred.
Tchaikovsky’s Egg. Parental Discretion is advised.
Book one of the complete Martin Forn Series. An Amazon Exclusive.