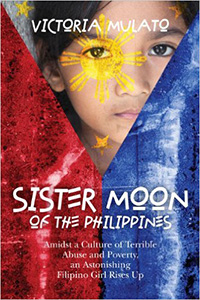 About Sister Moon Of The Philippines by Victoria Mulato

“A thought provoking, riveting non-fiction novel of a young girl growing up in an impoverished household caught in a web of extreme poverty and domestic violence in a country devoid of cultural resources. She rescues and protects her younger siblings as she tries to save herself from their father while at the same time salvaging honor and family’s dignity… A must read”.

Sister Moon Of The Philippines

Xulli entered the world in a way no child should ever have to; into a family and Filipino culture of poverty, neglect, and terrible abuse. Astonishing and unforgettable, this is a captivating story about the effects of abuse on the mind of a child, the heart wrenching struggles of an impoverished family, and how a young girl strives and dreams for something better.

Born in the Philippines in the 1960s, Xulli is the first child of many. By the time she is four, she is taking care of three other siblings with both her mother and father working. In the beginning things were difficult but not desperate. But then life turns exceedingly ugly when her father begins binging on gin, spending nearly every penny he earns on his addiction and leaving his family on the brink of starvation on a daily basis.

The alcohol makes her abusive father mean. And very violent. At first, his anger is mostly directed at her mother, but after a particularly nasty beating, she flees for her life, leaving the children with him. Her father then turns his attention to Xulli and her siblings. Cruelly, he tries to teach the youngest ones that they don’t need their mother or milk by putting hot peppers on the nipples of their bottles.

With her mother missing, Xulli must find a way to protect her siblings from their father and provide for their needs. Eventually her mother returns and the abusive cycle continues. Plagued by death, loss, and periods of starvation, Xulli struggles to provide for her siblings, when she is just a child herself.

Even through many horrible experiences and extraordinary challenges, her spirit shines, never giving up hope. Demonstrating an extraordinary resiliency to survive against all odds, Xulli inspires us as she finds the courage to succeed in her own life.

A note from the author:

“I have written this book to raise awareness of the wide spread domestic violence and child abuse that is so prevalent in the Filipino culture. All too often children in the Philippines are robbed of their basic human rights to an education because they have to become parents to their siblings or have been sold for money.

Through my writing and work, it is my passionate goal to help stop domestic violence and child abuse by educating the very young as well as adults about the effects of physical, emotional, and mental abuse, and show those in need how and where to seek help.”

This Non-fiction book is available in both ebook and print format.

Get The Book From Amazon.