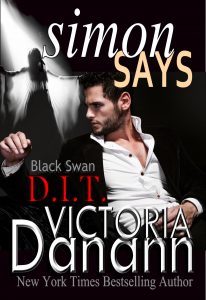 About Simon Says by Victoria Danann

Director Simon Tvelgar is haunted by love that was lost but never fades with time.

He thought she was gone forever, but what if…?

New York Times bestselling author, Victoria Danann, introduces a new Black Swan series with this enchanting novella that will grab you by the heartstrings.

Rosie Storm is about to get the chance to head up a new Black Swan unit, D.I.T. The Department of Interdimensional Trespass.

Twenty years ago Sir Simon was a vampire hunter. He took three month’s bereavement leave to go wild camping in the far north of Scotland following the death of his team leader. He expected solitude and fresh air to clear his mind and heart. He did not expect to fall in love. While wild camping on the stark landscape of the Orkney Islands, she disappeared into the standing stones. She faded into nothingness, a look of panic frozen on her face. As she reached out and silently called his name, he lunged to grab her an instant too late.

Her memory has haunted him every hour since.

Simon channeled his sorrow and loneliness into work until he eventually rose to the most powerful position ever held by an ex Black Swan knight. With tireless dedication, he built a congregation of talented misfits, watching and waiting for the one who could find Sorcha.

Find out why Black Swan has won best paranormal romance series the past four years in a row!