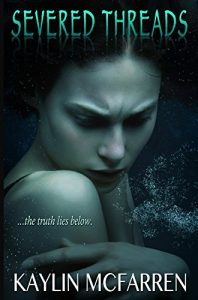 About Severed Threads – Book One, Threads Series by Kaylin McFarren

On sale for 99 cents from November 24th – December 1st

Believing herself responsible for her father's fatal diving accident, Rachel Lyons has withdrawn from the world and assumed a safe position at a foundation office. When called upon by a museum director to assist Trident Ventures with the recovery of a priceless relic from a sunken Chinese merchant ship, she has no intention of cooperating – especially after discovering her former love interest is involved. But Rachel soon realizes she has no choice when a drug-dealing gangster kidnaps her brother and demands two million dollars for his safe return. In order to rescue him and gain control over her life, she must not only overcome her greatest fears, but also steal the Heart of the Dragon out from under Chase Cohen – the same cursed relic that is holding the museum director's life in peril.

With three lives now on the line, including her own, Rachel must relive the circumstances that lead to her father's death. Will she gain Chase's trust and recover the Mai Le treasure in time or will they both die trying?