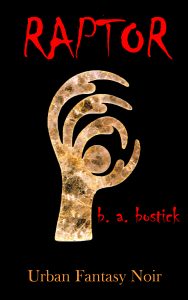 Demons only tell the truth when it will cause more trouble than lying.

21st century. For years now, ambitious demons have been taking on the guise of humans and insinuating themselves into positions of power and wealth. They have become CEOs of large corporations, politicians, lawyers, police chiefs, mayors, governors, dictators and, some say, even a president.

Humans are unaware this is happening. Only an ancient and secret society of Guardians stands between the human race and demon ambition. For centuries, Guardians have placed assassins called Raptors in every major population area around the world. Raptors, under orders from the Guardians, fight to maintain the balance between demonic attempts to achieve dominion and the safety of human race.

Frank Bishop was a vice cop for six years. Now he’s a private investigator who’s been hired to find a missing child. Bishop thought he’d seen everything the underbelly of the city had to offer until a demon slayer named Ariel saves him from being killed by one of her targets.

Bishop’s world is turned upside down when Ariel proves to him that demons and other supernatural creatures are real. With the aid of a young hacker, Ariel and Bishop form an uneasy alliance to find out who abducted six-year-old Suzee Elizabeth Morgan. Their search takes Bishop into a subculture of supernatural beings, good and evil biotech geniuses and demons who have insinuated themselves into positions of power and wealth by appearing to be human.

The battle for humanity begins.