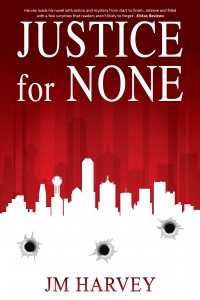 About Justice for None by JM Harvey

After a shootout in a South Dallas basement left spree killers Lamar and Lemuel Sutton dead, Dallas Homicide Detective Valentine Justice had expected a hero’s welcome. What he received was a disability pension and an unceremonious ejection from the police department amidst allegations that he had executed the Suttons in cold blood.

In the four years since he laid down his badge and gun, Val has settled uneasily into a new role as househusband and Mr. Mom to his twin two year old sons while his wife, Victoria, has continued her career as a prosecutor in the Dallas District Attorney’s office. But when Lamar and Lemuel’s teenage sister, Abby, is found brutally murdered on the banks of the Trinity River after accusing Val of hijacking more than fifteen million dollars in stolen gold coins, Val is forced to take up a gun again while Victoria must defend her husband against a murder charge even as she confronts her own doubts about her husband’s innocence.

Soon, both Victoria and Valentine are caught in the crossfire as a crew of peckerwood gangsters and crooked cops come searching for the gold.