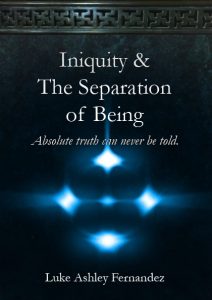 About Iniquity and The Separation Of Being by Luke Ashley Fernandez

Many believe as knowledge of consciousness science becomes more widespread in society, we are on the verge of a paradigm shift, of proportions that would make the ‘Flat-Earthers’ shift in world view look like an ant-hill in contrast the mountain we are now scaling.
The novel, described as the Sophie’s World of consciousness science and philosophy is a valuable introduction to the latest theories on the nature of consciousness based upon Sir Roger Penrose’s Orch-OR theory. Roger Penrose is the English mathematical physicist, mathematician and philosopher of science, the Emeritus Rouse Ball Professor of Mathematics in the University of Oxford, who worked with Stephen Hawking to develop our understanding of the Big Bang itself.

Amrit is a young man who has lived a life burnishing his intellect as a scientist, a theoretical physicist and an avid defender of truth. He had worked endlessly for the regime, for ‘the cause’ and should have been lionised for his success but instead finds himself set upon by the dogs of war. He cannot understand this bizarre twist of fate, and the regime’s many tentacles have now tracked him to the last place on Earth he thought they would find him, in the most remote capital city in the world. Having nowhere else to run, he somehow finds himself seeking refuge in a Buddhist monastery and in the throes of the deepest of meditative experience that enlivens his mind and captivates his senses, he embattles perdition and the conviction of his own demons.