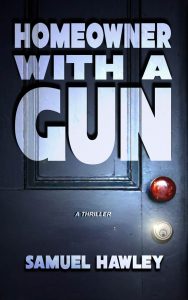 About Homeowner With a Gun by Samuel Hawley

It’s the middle of the night. You’re awakened by a noise. Someone’s in your house. What do you do?

When it happens at 148 Maple Drive, homeowner Jeff Shaw gets his gun and goes downstairs to investigate. He finds two men in the kitchen and shoots them both. Dead.

The incident puts great strain on Jeff and his family. He wants to believe they just need to get on with their lives and everything will return to normal. But it’s not that easy. The dead intruders belonged to a gang, ANG, “Ain’t No Game,” that now wants revenge. And one of the gang, an ex-con with the street name I-Man, knows more about the break-in than he’s letting on.

It starts with a threatening phone call. Then it gets worse. The police, unable to protect the Shaws, suggest they move away for a while. But Jeff won’t be intimidated from his own house. “Homeowner With a Gun” takes the reader on a suspense-filled thrill ride as this everyman fights to save himself and his family, while something a detective said plays in the back of his mind: “Maybe the intruders broke into the wrong house. Happens all the time. You wouldn’t believe how often…”