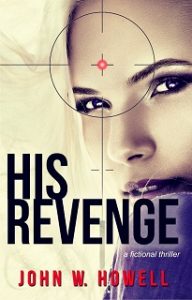 About His Revenge by John W. Howell

The second John J Cannon Thriller moves from a barrier Island off the coast of Texas to Washington DC, then to Northern California, and finally to Ecuador. John is on the receiving end of an offer he cannot refuse. His avowed enemy Matt Jacobs now wants John to help him shake the reputation of the US in the world political arena. If John refuses, Matt plans to murder innocent Americans including John’s latest relationship. John’s only way out is to pretend to go along with the plan and hope for a miracle.
John Cannon unwillingly becomes an accomplice in a terrorist plot to undermine the US President’s credibility and the stability of the worldwide oil market.