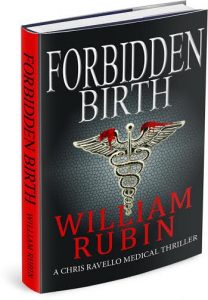 About Forbidden Birth by William Rubin

Will be priced $2.99 on February 11th and 12th, the last two days of it being on Kindle Countdown Deals.

Unspeakable medical procedures. A crazed serial killer. Who will protect the innocent and at what cost?

Doctor Christopher Ravello is driven by an unquenchable desire to avenge his mother’s senseless murder. He forsakes a lucrative career in medicine, and plunges headlong into the brutal, unforgiving world of a New York City homicide detective. Head of the new Division of Medical Crimes, Ravello’s first case pits him against a brilliant, sadistic serial killer. Known only as The Giver, he is hell bent on subjecting young women and their unborn babies to his illicit experiments. As the body count rises, New York City is engulfed in fear. Fighting an illness which threatens his job, immersed in turmoil at home due to his radical career change, Ravello struggles to understand who The Giver is and where he will strike next. Just as he discovers the killer’s identity the unspeakable happens, and Ravello is confronted with an agonizing choice: will he play it safe or make the ultimate sacrifice to save his loved ones and the city he is sworn to protect and serve?