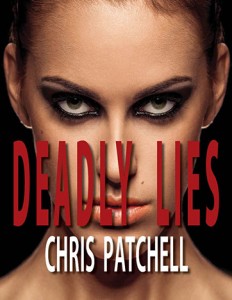 About Deadly Lies by Chris Patchell

As a teenager, Jill Shannon fell victim to her stepfather’s cruel abuse. Now as an adult, Jill’s made it – she has a successful career and a solid, if not static, marriage to Detective Alex Shannon. Together they live out what seems to be a perfect life in Seattle.

The vow she made as a teenager to never again be a victim lies dormant – until one day a reporter lures her to his hotel room under the pretense of an interview – and suddenly all of it comes rushing back. Jill seeks revenge on the reporter, triggering a series of events that leads Jill down a wormhole of retribution, forcing her to spin an ever-widening web of lies.

Meanwhile, Alex is pulled into a case of a series of murders that began as cyber relationships. There seems to be a familiar fingerprint on these crimes, but Alex refuses to believe the murderer could be someone close to him…

“Chris Patchell”s debut novel, Deadly Lies, is a taut, fast-paced thriller that grabs you from the start and doesn’t let go. Patchell is a master storyteller with a real talent for creating pulse-pounding suspense.”—Kevin O’Brien, New York Times Bestselling Author of Unspeakable.

Get The Book From Amazon.