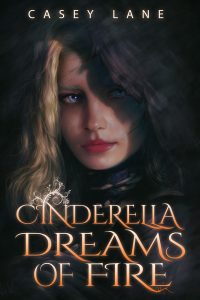 About Cinderella Dreams of Fire by Casey Lane

What if Cinderella led a double life?

Cinderella has a secret. In the 10 years since her mother's death, she's only pretended to be too weak to challenge her cold-blooded stepmother. By day, she cleans the floors and washes the laundry. By night, she takes to the streets as a fearless thief with no equal. Out on a routine mission, Cinderella never expected that she'd run into him…

Braedon is hardly a model prince. He spends most of his time in the tavern, much to the dismay of his royal mother. When a unexplainable blight strikes the queen's soldiers down, Braedon's attempt to help brings him face-to-face with the beautiful, sardonic thief. He wants nothing more than to partner up with her, even if it could get him killed…

The thief would much rather work alone, but the prince’s persistence starts to wear down her defenses. When the evil force decimating the army turns its attention to the throne, Cinderella and Braedon have one chance to save the kingdom, their loved ones, and themselves.

Cinderella Dreams of Fire is the first book in the Fairy Tales Forever series, a set of fantasy novels that inject the classic retellings you know with a burst of attitude. If you like strong female characters, action-packed fantasy, and simmering chemistry, then you’ll love Casey Lane’s romantic, fast-paced adaptation.

Buy Cinderella Dreams of Fire today to read a fairy tale that fights back!