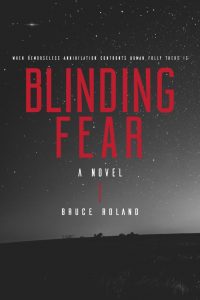 About Blinding Fear by Bruce Roland

Life is good for Claire McBeth in New York City. She’s single, very attractive, and has a comfortable apartment in midtown Manhattan. She’s also a science and technology reporter for The Sentinel, the city’s premiere daily newspaper. Her boss sends her to Texas for an exclusive interview with the billionaire who is about to put space tourism in the headlines. She also finds herself interviewing Herc Ramond, the charismatic chief pilot for the company. In the midst of their interview, Herc is called to the bedside of a critically-injured friend and co-worker who is also an amateur astronomer. Claire accompanies him and watches as his friend struggles to lay out a story of how he came to be in the hospital that is horrifying and seemingly unbelievable. Suddenly, they are confronted by a menacing FBI agent demanding to know everything Herc’s friend has said. When Herc refuses, he and Claire are thrown into a seething cauldron of terror and violence as they criss-cross the country pursuing the truth behind the story. Ultimately, they find themselves facing a cataclysm of unimaginable proportions that only they can resolve.