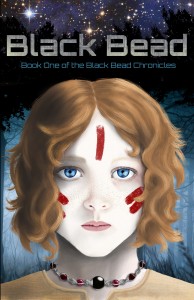 About Black Bead: Book One of the Black Bead Chronicles

“Mesmerizing Page-Turner” On a savage, outlying planet an enclave of psionically-trained humans have built a utopian, matriarchal society that lives in harmony with all life. Leaving behind the polluted and corrupt world in which they lived, they colonized a new home far from the eyes of the galactic empire. Shielded from the rest of the galaxy by the dangerous beasts that inhabit their lush, forested world, the village lives a simple life under their Home Dome. But their goal was more than just to live in peace – they wanted to create the perfect human who could bring peace to the galaxy. Rather than merely cloning themselves, they began to manipulate genes in order to create a race of mutants with enhanced telepathic powers. Under the direction of the ruling witch coven, each child of the Windfall Dome is tested at a young age to asses their abilities – a test which can plot the course for the rest of their lives. Unfortunately, Cheobawn – the daughter of the ruling First Mother to the dome – is marked with the Black Bead on her Choosing Day, a symbol of bad luck and shame. It seems the child the mothers had placed so much hope in would not be the future ruler they had hoped for. Yet there is something powerful about her that the elders don’t understand. Finally of age, Cheobawn is chosen to join a pack to act as the psychic Ear on a foraging mission outside the dome. She knows this is her chance to prove herself. But something sinister stalks them and each member of the pack must draw on their unique strengths and a lifetime of training if they want to survive to see another day. In her visionary new series The Black Bead Chronicles, author J.D. Lakey invites you to journey along with Cheobawn, Megan, Tam, Connor, and Alain as they use their wits and their Luck to unravel the mysteries of the deceptively bucolic life beneath the dome in this coming of age metaphysical science fiction adventure. by J.D. Lakey