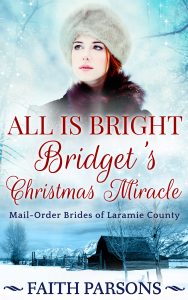 About All Is Bright: Bridget's Christmas Miracle by Faith Parsons

After Chase Williams' first wife died of pneumonia while he was out-of-town, his young daughter stopped speaking. Three years later, he's still not ready to marry, but little Pearl desperately needs a mother. He doubts that any woman can heal his broken heart, but he's willing to propose to a woman who'll be kind to Pearl.

As the oldest of six children, Bridget Doyle became responsible for the cooking and cleaning when her mother died of a post-partum fever. Marrying's not an option for her–if she leaves her two youngest siblings alone, who will stop their drunken father from taking the belt to them?

Bridget discovers that her youngest brother, Tom, has been playing matchmaker: he's been writing letters on her behalf to a rancher in Wyoming. Not only has Chase proposed, he's agree to let her bring Tom and Mary with her. The catch–she's also got to find a way to communicate with his mute daughter Pearl, while playing second fiddle to the ghost of Chase's first wife.

Will Bridget find a way to heal Chase's broken heart and bring two fragmented families together?

All Is Bright: Bridget’s Christmas Miracle is a clean, inspirational mail order bride romance. While this book is part of a series, it can definitely be read as a standalone book.

In Faith Parson’s heartwarming clean romance stories, courageous men and their mail-order brides join together to make a new life on the Western frontier.