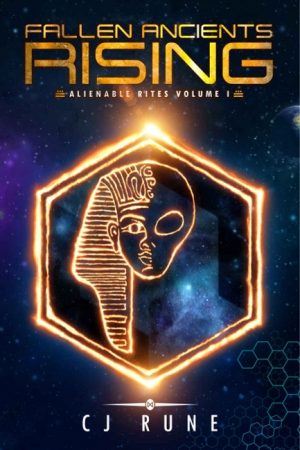 EVERYONE has wondered about it.

MOST believe it possible.

SOME even wish for it.

…but NO ONE expected this!

“A fascinating story that cleverly weaves ‘Stargate’ with ‘Ancient Aliens’, and just enough ‘The Da Vinci Code’ to leave you praying we never make contact.”

An unusual phenomenon sends one of Saturn’s moons, Hyperion, hurtling toward Earth. For months, humankind faces the fear of possible extinction until Hyperion emerges from behind Jupiter on a course for the Sun instead.

While the world celebrates, an alien species arrives with a dire warning; Earth is not out of danger. Communicating through persons they abducted decades ago, the aliens offer advanced knowledge that could not only save humanity but also bring an end to many other global issues.

As world leaders consider whether the aliens should be trusted, and wonder how the aliens’ arrival could affect their own agendas, archaeologists uncover a secret in Egypt. An ancient secret, guarded for thousands of years, that suggests the aliens had visited long before recent times. Even as far back as mankind’s first civilization, raising questions about who the extraterrestrials might really be and what their true intentions are.

This story takes us on a journey of a “What if we’re not alone?” using actual history, beliefs, and connecting many common dots across various ancient mythologies and religions to produce one possible and thought-provoking scenario.

A scenario that is completely, and entirely, fiction.

What Inspired You to Write Your Book?
I am an avid reader and love the science and speculative fiction genres. Also, I've wanted to be a writer since I was eight years old. So, after years of not finding certain stories I've always wanted to read, I figured I may as well start writing them myself!

How Did You Come up With Your Characters?
I knew when I started this book I would need a diverse mix of character personalities. More than one of the main characters needed to be strong women, and another female character needed to begin weak but then grow stronger. After that, I also needed multiple types ranging from humorous to annoying, and from panicked to calm & stoic, regardless of their genders. In the end, I wasn't searching for specific characters, per se, but specific personalities so as to present the readers with a wide range of opinions and points of view regarding the major events which occur in the story.

Book Excerpt/Sample
Dottie screamed, “They’re moving!” Terrified, she started toward Robert, then reconsidered and, instead, rerouted to Stacy and latched onto her.
Jen said, “No. They’re not moving. We’re moving.”
The Sun continued falling down the clear wall until it stopped within a line of sight inside the electrified loop on the large pillar. The Earth stopped to rest directly across from the Sun on the opposite side of the disk they were in.
Everyone and everything was then silent.
Suddenly, outside, in space, the previously bright points of white twinkling stars morphed into horizontal streaks of light. Each streak contained every color of the light spectrum ranging from mostly violet in the direction of the Sun, to mostly red toward the Earth. The width and number of colors in those streaks lessened on the sides of them closer to the Sun and Earth and were wider and more colorful in their middles, and each streak varied from one another in both their brilliance and their width.
These light streaks, one for each star and planet within view, compounded thousands of times on top of each other, created a visual effect of traveling in a tunnel surrounded by all the colors of the rainbow.
Dottie gasped and ran for the now quickly shrinking Earth behind them. Without thinking, she ran her head hard into the see-through wall. Unfazed, she slapped her hands against the wall, as if she might be able to touch the Earth. She screamed, “I want to go home!”

Author Bio:
As a young child, C.J. Rune loved to read the types of fiction which take us on brief journeys to other worlds, but then forever stay with us in this one. At eight years old, he wrote his own short story for a class assignment; a story that received critical acclaim from his teacher – and only his teacher (and, truth be told, she was actually only a teacher's aide). Even still, she had suggested he consider becoming a writer someday and, like those works of influential fiction, that idea stayed with him.

Throughout adulthood, he was distracted with such things as business management and consulting, and running his own Internet-based companies. Though successful in these, they left little time for writing. Yet, his mind never stopped developing those stories. Characters and worlds creating themselves night after night, year after year, demanding they be brought to life, even when he wanted them to stop. It wasn't until he confessed these things to his wife – that fateful day when she nonchalantly informed him he wasn't normal (in the most loving way, of course) – that he decided to finally do something about it … start writing.