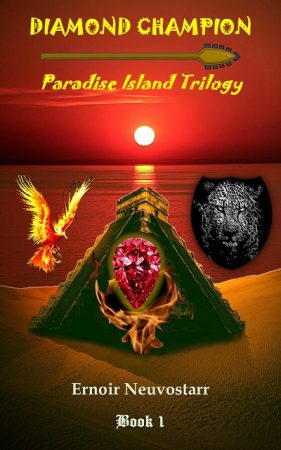 On a sun-drenched, tropical, volcanic island, a group of villagers enjoy their peaceful lives in paradise. Some take it for granted whilst other cherish the beauty. Everything was perfect. Until one day a ship of explorers from a faraway land, in search of gleaming treasures, arrived on their pristine golden shores.

The islanders are interested in exploring new opportunities and working with the Conquistador and his men. But the natives are not prepared to blindly accept strangers and reveal the secrets to their island. Meanwhile, the explorers are attracted to the resources the place can offer, suspecting there are hidden gems and that there is more to the island than meets the eye.

Will both civilisations able to agree to a trade deal? Or will there be a war between two different nations?

Action, Adventure, exploration and romance all collide on Paradise Island.

What Inspired You to Write Your Book?
Initially, I had an idea to write a story about treasure island. But that seemed a bit cliched as there were many stories similar. Subsequently, movies like Pirates of the Caribbean, Pocahontas and Eldorado all crossed my path, further nudging that idea into my mind.

Nevertheless, I loved historical fiction and I knew I wanted to write something in this genre. Afterwards, as I searched for treasure hunting stories, I came across the Spanish conquest and that was when my idea crystalised.

How Did You Come up With Your Characters?
The characters were all fictional but I had to based these on the historical events at that time so I researched into the typical Aztec names and Spanish names. This included they usual people you expect to find in that setting such as native and soldiers.

Book Excerpt/Sample
The breaking dawn eased over the horizon, showering light upon on the great, circular, tropical island, whilst moist air percolated throughout the humid, chattering jungle. The rising, mellow sun coated its orange beams over the tranquil trees and penetrated deep through the dense, swaying, lush leaves. Constant warm heat emanated from the active volcano that has been smouldering for a few months; wispy smoke trails crept out from the cavernous vent like a monster’s mouth puffing into the clear blue sky.

This area was home to the Grahessen Clan, the hosts of the annual warrior event. The village was situated on the North-east side of the island where the land was level and fertile. The grassland, shaped like a two-stepped large amphitheatre, had one end with higher ground, gradually tapering to flatter soil. Overlooking the amber grassland, a series of oval, clay adobe huts with conical thatched roofs lined the terraces. The quaint huts, evenly spaced apart around the tiers, had intermittent timber steps that linked the different levels. In addition, local riverbanks provided the materials to construct the circular, mud units that had small openings cleanly cut for the windows and doors.

The village was surrounded by tall, mature, dark green trees and worn, dirt tracks which demarcated the boundaries and snaked away to other parts of the island. The first tier mainly consisted of grassy surfaces with a few village huts dotted along the path. Situated higher up on the second tier, a large, singular building overlooked the whole village.

A young, sun-tanned man emerged from one of the mud huts located on the first tier and stepped out onto the grass wearing leather sandals. He was a tall, fresh-faced fellow with short hair that matched the chocolate brown loincloth he wore around his waist. A small, black, obsidian stone dagger with a jade handle dangled from the leather belt. He slowly stretched his body, flexed his muscles and bent down to touch the ground. After loosening up his trim figure, he squinted his brown eyes at the dazzling landscape and examined the horizon, absorbing the festive view of the preparations for today’s event.

Even this early in the morning, many of villagers were scuttling across the open grassland, preparing for the annual sporting competition; the volunteers hung decorations and clan banners, laid out wooden tables, stocked plates of food and marked out the field for the first event.

The lowest part of the village consisted of a large, rectangular open grassland; on the left-hand side of the ground, a series of square chinampas fields grew the villager’s crops, whilst on the other two sides, the rustling jungle provided a physical barrier delineating the extent of the clan’s boundary.

The athletic man glanced up behind him, scanning the painted white clay walls of the large rectangular building and observed an ultramarine quetzal bird dance along the thatched pitched roof and hop onto the square chimney. Above the door, a wooden sign stated ‘Grahessen Calpolli’. This was often the place for village gatherings and meetings. Subsequently, he strode along a dusty path and hiked up the timber steps towards the meeting house, knowing there were already people inside. He smiled, believing today would be a good day for him.

Author Bio:
I am a Chinese-British national who has lived in the UK since I was a kid. Living in the Yorkshire countryside, I prefer the lush, green rural setting. I first gained enthusiasm for books when I was at school studying English language and English literature. This was probably because I had a great English teacher! I enjoy reading sci-fi, horror, mystery and historical fiction books. My favourite authors include Stephen King, Dean Koontz, Terry Pratchett, J.R.R Tolkien, C.S Lewis and Rick Riordan.

I am a Charted Surveyor who have worked in a variety of sectors including local government, education, insurance and the NHS. Using my spare time after work, I started to write stories. I had ideas for a book and considered modern day publishing structures suitable to enable me and put those thoughts onto paper, or more appropriately, digital. These days, it is better and easier for self-publishers to publish your own books. And so, I have dived in…