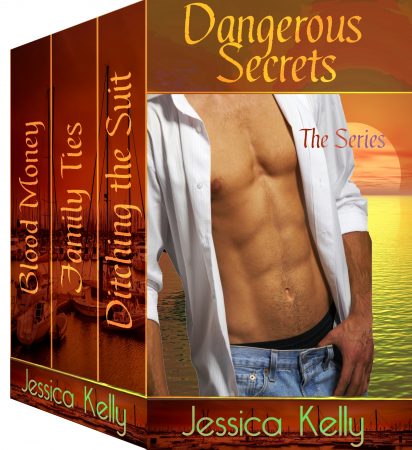 When you’re a sexy billionaire, the secrets are juicier and a whole lot more dangerous…

When Kyle Montgomery gave up his pressure-packed billionaire businessman lifestyle, he thought everything was going to be perfect — including having the perfect woman in his bed. But little did he know that all of his billions would make him a target for people who will stop at nothing to get their way.

Kyle’s dream life quickly turns into an action-packed adventure, with danger lurking around every corner — and the stakes get higher with every secret that’s dragged out into the open.

All of his money can’t save him from a landslide of steamy suspense and surprises. Will he be able to overcome it all? Or will these dangerous secrets destroy his life forever?

With more than 300 pages of action, Dangerous Secrets – The Series is a box set that will take you on a wild ride through three sexy romantic suspense novels. All of the books in this sexy suspense series contain steamy scenes and adult content, so they’re best for readers who are 18+.

Here’s what other readers are saying about this series:

– “I have thoroughly enjoyed this series from the first chapter to the last page of book 3 in the series. The twists and turns throughout keep you guessing what will happen next.” — Kindle Reviewer

– “Absolutely loved these books… Did not want the series to end.” — Kindle Reviewer

– “There are twists and turns that keep you reading and wanting more.” — Kindle Reviewer

– “Jessica Kelly is killing it with this next Montgomery series.” — Kindle Reviewer

– “I am loving this series. Enjoying the twists and turns.” — Kindle Reviewer

– “If you haven’t read about all the Montgomery boys you are so missing out.” — Kindle Reviewer

– “I certainly did not see the twist the author was going to throw in, which is always a nice surprise!” — Kindle Reviewer

– “I could not put the book down until I knew how it would end.” — Kindle Reviewer

– “I absolutely loved it” — Kindle Reviewer

– “This series was fabulous.” — Kindle Reviewer

– “I’m in heaven with this series.” — Readers Group Reviewer

– “His journey is going to be fun and glad to be aboard! Great read.” — Readers Group Reviewer

– “Another excellent read from Jessica. Kyle and Veronica are a couple you fall in love with. You almost feel as though they are your friends.” — Kindle Reviewer

Link To Dangerous Secrets – The Series On Amazon Kindle Unlimited

What Inspired You to Write Your Book?
Out of all the Montgomerys I had written about before, there had never been one who actually worked at the billion-dollar family business, Montgomery Oil. Kyle started off doing what he was supposed to do — wearing a suit and going to work as an oil executive — but he gave it all up to follow his passions. It’s a twist that makes him different from the other sexy Montgomery men!

How Did You Come up With Your Characters?
I made Kyle a little more straight-laced than the other Montgomerys. He can definitely be a bad boy from time to time — and that side of him comes out more as the series progresses — but he starts off acting a little more practical than they do, which was a fun twist to write about.

Book Excerpt/Sample
“Tell me, Captain Bill, have you ever seen anything more beautiful in your life than this place right here?”

“Nothing tops the open water — or a pretty girl,” the chubby older gentleman said with a wink and a chuckle. “But if you’ve got to be on dry land, Belle de Mer is a damn good place to be.”

“Forget the girls, this is definitely my happy place,” Kyle said with a smile.

Kyle knew he sounded a little cheesy, but he didn’t care. Every time he walked up to Belle de Mar Marina, he swelled with pride. The rows and rows of luxury boats sitting in the crystal blue water of Ft. Lauderdale’s Intracoastal Waterway were proof that he’d made it. He’d given up the life he was supposed to have — the insanely stressful office, the overbearing father, and more family responsibilities than he could count — and he was doing something that actually made him happy to get out of bed in the morning. Owning and running Belle de Mer didn’t feel like work to him. It was the ultimate dream job.

Despite all of its billions, Montgomery Oil simply couldn’t compete with Belle de Mer. The only thing he regretted was waiting 28 years to take control of his life. Sure, it bothered him that his father had refused to speak to him ever since he quit his fancy executive job — at the generations-old family business, no less — but it didn’t bother him enough to abandon his passion. He’d swapped out the throbbing vein in his forehead for sun-kissed cheeks, and he never planned on turning back.

Kyle turned and saw Brittany Gardner walking towards them. She was blonde and leggy with big boobs and a newfound respect for sailing. At least, that’s what the Belle de Mer staff had told him. She’d only became interested in Belle de Mer once Kyle took over. She didn’t have a boat docked here, but that didn’t stop her from coming by and hitting on the Texas billionaire a few times a week.

Kyle was amazed that a simple greeting could be so flirty. Brittany oozed sex appeal, and it was no secret that she wanted to get into Kyle’s pants. Most guys would have had their way with her by now, he thought to himself, but I don’t want to be like most guys.

“I have some time before my yoga session, and I thought I’d come say hello,” she said as her eyelashes batted. She leaned in and began stroking his shoulder. “Do you have a few minutes to grab some coffee, Kyle?”

“Sorry, but I don’t,” Kyle answered in his best disappointed voice, even though he was anything but. He ran his hands through his sandy blonde hair to try and make it look like he was really bummed to be busy. “Captain Bill and I are going over some final details for his big charter trip.”

“Oh, that’s too bad. Guess I’ll be early to yoga then. You should join me in class sometime, Kyle. You’d be really impressed by how flexible I am,” she winked.
He heard Captain Bill stifle a laugh, and then Brittany turned and left as quickly as she’d arrived.

“What was that you were saying about pretty girls, Captain Bill?” Kyle laughed.
“They’re nothing but drama.”

Unfortunately, Kyle knew that all too well. Even though it had been a couple of months since he called off his wedding to Lauren, his stomach still churned anytime he thought about women. Between his money and his good looks, there was always a line of hot girls trying to snag him, and he’d never minded it. Hell, it was damn nice to have such a selection. But after a narrow miss with such a manipulative, lying golddigger, he was going to take his time wading back into the dating pool.

“You billionaires know all about drama,” Captain Bill teased. “When you become an old fat dude like me, you’ll give your right arm for a little female drama.”

Lord knows Kyle could’ve had a boatload of female drama if he’d wanted it. Brittany wasn’t the only one who’d started hitting on him. Even though the Montgomery name was huge — thanks to his movie director brother, Kris, his sex symbol cousin, Dominic, and his superstar athlete cousins, Hunter and Nash — Kyle had never expected to create such a buzz when he bought Belle de Mer. But before the ink on the paperwork was dry, there was a line of rich women and ditzy socialites waiting for him. They all claimed that they wanted to talk to him about his sailing expertise, but after hearing one too many eye-rolling pick-up lines and seeing one too many women just “happen” to bend over in their low-cut shirts, it was obvious that all they really wanted was to take Lauren’s place on his arm.

He was proud of himself for turning them all down. He wasn’t ready for the golddiggers, the cougars, and whatever else Ft. Lauderdale society threw his way — and he wasn’t going to let anyone pressure him. His cock wasn’t exactly thrilled with the decision, but his principles were more important than sex.

At least for now.

She’s not afraid of working hard to make her dreams come true. Luckily, though, creating new characters and new plot twists doesn’t actually feel like work to her!

Jessica dreamed of becoming a successful romance author for more years than she can count. Now that she has written more than two dozen novels that combine love, lies, suspense, and the occasional second chance, her dream is officially a reality.

When she’s not dreaming up new story ideas, this native Floridian can be found spending quality time with friends and family, soaking up the sun on the beach, and — of course — reading.

Link To Dangerous Secrets – The Series On Amazon Kindle Unlimited