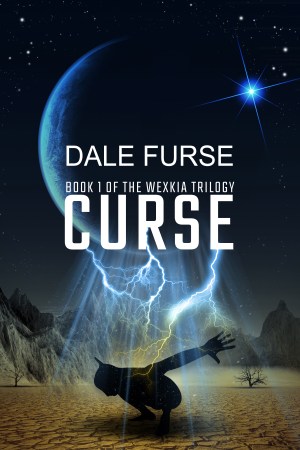 Nell is looking forward to leaving the isolation of her beach, and attending University in the city. But when her father reveals she isn’t human, but a product of two warring alien species, her life somersaults as ever-increasing evidence proves him wrong.

She is something else.

She must now decide if knowing the truth is worth risking lives
.
With friend Sam by her side, she travels to an alien world where she must battle the growing number of enemies and find the hidden book containing the real facts about her ancestry—whatever that may be!

What Inspired You to Write Your Book?
Curse is the first book of the Wexkia trilogy and Nell’s story was my go to world when I wanted to escape into my imagination as a child. I used to be Nell. Sometimes I still am. Her/our story grew and evolved as I got older and had to be finally written.

How Did You Come up With Your Characters?
Most of the characters were always there from the beginning. They just appeared in my childhood imagination. I used to think they were real. Actually, I still think they’re real.

Book Excerpt/Sample
Nell stepped silently across the sage-green carpet and opened the door opposite the bed. ‘This is a two-way bathroom. My room is connected to it, so make sure you lock the door when you’re using it.’

Cay-meka flounced to the window and looked out for a moment before turning on Nell. ‘I would prefer not to share a bathroom with you. I don’t like wintars.’

‘I’ve noticed,’ Nell said curtly. ‘But I’m only half wintar.’

‘Wintar blood flows through your veins,’ she sneered. ‘And you have dreamt of flying.’

‘What do you mean by that? And what exactly have you got against wintars?’

‘They killed my father.’ Cay-meka burst into tears.

‘You really are psycho,’ Nell said.

‘I loved my father,’ she cried. ‘They took him away from me.’

‘I’m sure you did, but I read about the accident in the book on Linque. The collision between the spaceships was caused by a malfunction on the ship your father was flying. If anything, your father killed the wintars.’

‘How dare you!’ Cay-meka’s malice returned and she went after Nell, screeching. ‘You! You are cursed. You are a freak!’

Nell ducked past her and the girl nearly fell through the open doorway. Stopping abruptly at the window, Nell swallowed hard and pointed at the closed window. ‘You mean, like that?’ She stared at what she realised must be a wintar.
He looked human except for the craggy, rust-coloured wings hanging out of him like they were tired. The wintars in the book of Gramlax were all muscled, friendly-looking men and women but this one was straight out of Nell’s nightmares. Greasy, black curls fell over small, round eyes, too close together, his nose melted into his cheeks and his chin disappeared into his thick neck. His shirt, a size too small, allowed a hairy stomach to escape. Thick, hairy forearms leaned against the window, his little eyes widened and he screeched a name Nell didn’t get. Flapping his huge wings, he rose out of sight.

Nell spun to face the girl just as she rushed out of the room, screaming.

Nell ran after her but by the time she’d descended the stairs, Cay-meka was already on the veranda calling to her mother. Nell pulled up at the open French doors.
Cay-meka was shaking Sam wildly. He sat on the floor holding his flopping head in his hands and moaning. ‘Where is my mother?’ Cay-meka screamed.

‘Leave him alone!’ Nell pushed Cay-meka away, crouched down beside Sam and spoke as calmly as she could. ‘Sam? What happened?’
Her hand moved towards his forehead. Cay-meka stooped over him, her face nearly touching Sam’s. His gasp was more like a yelp as he pushed the girls away with so much force, they both landed on their backsides with their legs in the air.
‘I wasn’t going to do anything, you big baby,’ Nell said, finding her feet. She helped Sam stand up and waited while he found his balance. ‘Where is Dar-seldra?’ she asked.

‘We were standing out here talking, Dar-seldra and me …’ Sam began.

Nell nodded her head, hoping to encourage Sam to hurry. She also tried to appear calm but her thoughts were beginning to jumble and the pulse in her neck beat wildly.

Sam continued. ‘She, Dar-seldra, was leaning on the railing when some sort of giant bird came down and grabbed her with its claws. It just took off with her.’ He was shaking his head. ‘I wouldn’t believe it, except I saw it with my own eyes.’

‘Did it look like what we saw in the book? Did it look like a wintar?’ Nell knew it had to be the repulsive thing they saw at the bedroom window
.
‘Sort of.’ He grimaced as if trying to remember. ‘Except it was bigger, much bigger.’

‘Of course they’re bigger than pictures in a book,’ Cay-meka gibed. ‘And of course, it was a wintar.’ She started to cry and stomped around in circles, moving her arms in all directions. ‘They have Mother and I am all alone. I am stranded here.’ Her face contorted as she glared at Nell and Sam. ‘With you.’

‘We’re not exactly rapt at the thought of spending any more time with you either,’ Sam said. He turned away and leant over the railing. His face was serious and thoughtful. He wasn’t usually either.

‘I want my mother,’ Cay-meka sobbed as she collapsed, mumbling, onto the porch swing.

As her cousin rambled on, Nell thought about her promise to her father. She didn’t notice Cay-meka had stopped waffling and was crying quietly, nor did she notice Sam was watching her. After several minutes, pacing up and down the veranda, she shrugged her shoulders and said, ‘I’ve got to try to talk to these wintars myself. We have to find them.’

Author Bio:
Dale has enjoyed many creative pursuits including playing guitar and singing in a band, acting and directing in theatre, writing novels, short stories, plays, songs and poems.

She also reads any genre so long as the story is good. Her writing is the highly imaginative, interweaving of Science Fiction and Fantasy where she forges tales that also take on an Action Adventure feel. After over thirty years of writing, she still delights in her journeys to unknown places, meeting unheard-of peoples.

Dale adores her family, friends and the wonderful people who read her stories.